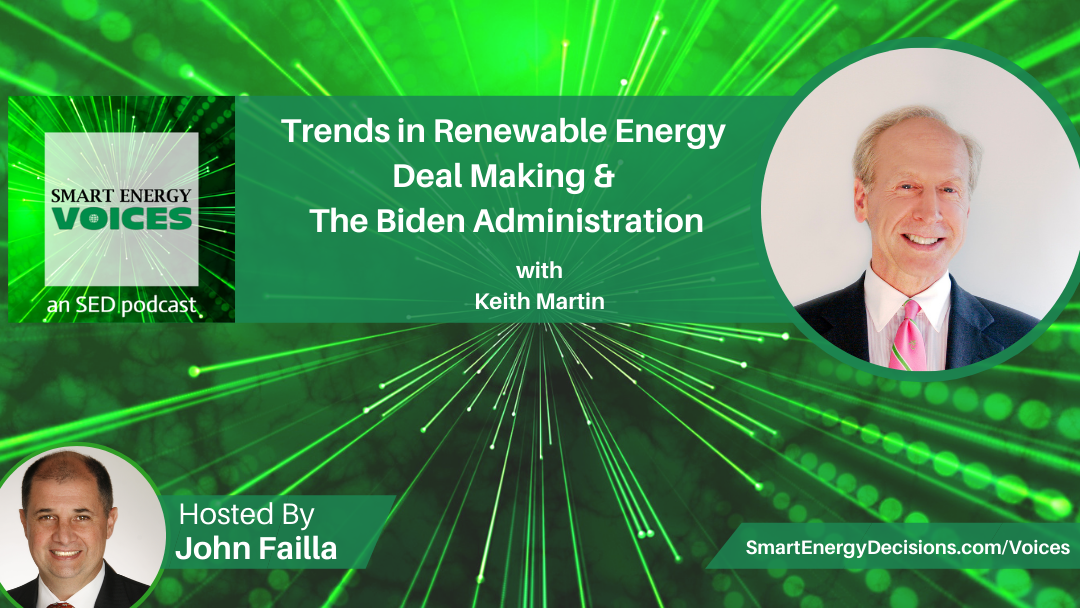 In this episode of Smart Energy Voices, host John Failla speaks with Keith Martin, a transactional lawyer with Norton Rose Fulbright. Keith worked for 146 companies last year and his firm did $145 billion in project financing. He also lobbies the US treasury and congress on policy issues and has worked for two democratic senators. Listen to learn more about clean energy from the perspective of legislative infrastructure.

Renewable energy deals since the 1970s

Keith has been working in clean energy since after the Arab oil embargo in the late 1970s. He headed the group at Norton Rose that helped give birth to the independent power industry by litigating against utilities in twenty states to open markets. Norton Rose has worked through two main periods of growth in renewables. From 1978-85 the US congress encouraged renewables by offering tax credits but they didn’t get much traction and people lost interest. After interest started reviving in the early 1990s, the tax credits were restored and have been working more effectively.

The Biden administration and clean energy

Keith states that the high expectations for renewable energy are justified in the new presidential administration. President Biden has already taken steps to help in administrative ways. For example, he just announced the first construction permit for offshore wind. He’s also encouraging companies to report on the effect of climate change on their business models. All eyes will be on him to see what he has planned for financial incentives in renewable energy projects.

The new administration is also accelerating the response to climate change. Solar, wind, and storage are the greatest focus of new capacity additions. Interest in energy storage has increased to the point of being included in virtually every utility-scale solar project being bid on, giving it the potential to be the most significant change within clean energy’s immediate future. Expanding the tax credit will help further this progres, as Commercial and Industrial companies are eyeing hundreds of distributed energy projects but needs that extra help to make them financially viable.

The movement towards carbon capture

Up until this point, the primary options to decarbonize were to reduce consumption or switch to clean energy. Now, however, companies with large carbon footprints are stampeding toward investing in carbon capture. This interest is being driven by the section 45Q tax credit. Currently, the progress of the tax credit is stalled because the IRS needs to clarify some details and there are many questions to be resolved. Meanwhile, companies are still working in expectation of the tax credit. Elon Musk is even offering a prize to whoever can create a new technology for carbon capture.

Keith Martin is a transactional lawyer in the Washington office of Norton Rose Fulbright. The firm did $145 billion in project financings and closed 331 transactions in the last three years. The prestigious Chambers directory gives Keith its sole "star" ranking among US renewable energy lawyers. Keith worked for 146 companies last year on numerous transactions. He also lobbies the US Treasury and Congress on policy issues. He has also edited the widely distributed Project Finance NewsWire for the last 24 years.