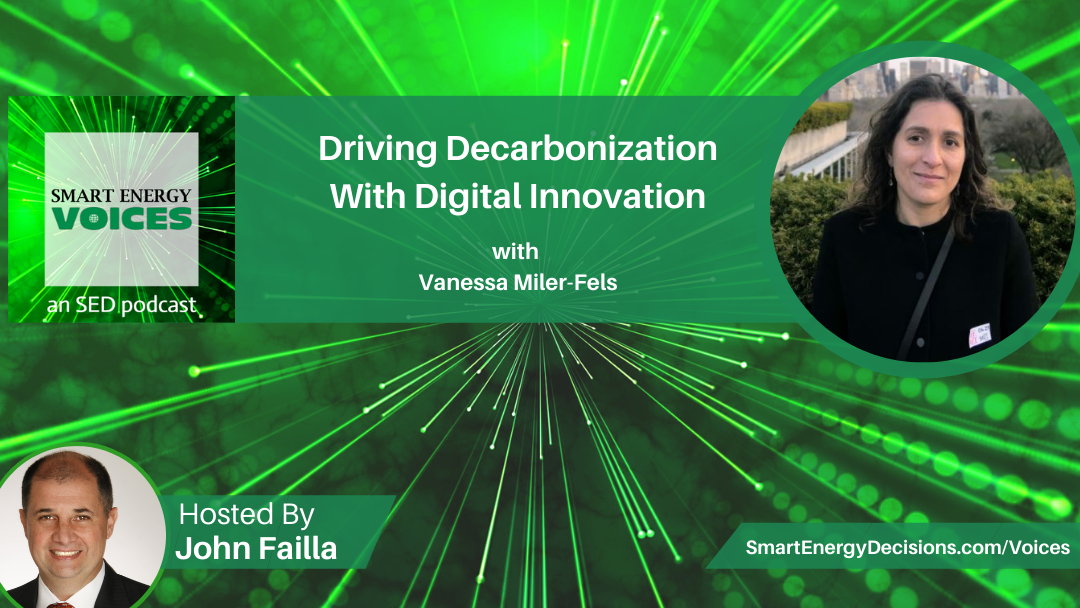 Decarbonization is one of the primary goals many companies are trying to achieve in their operations. The reason is simple… science has shown that the world is facing an urgent carbon problem. If we don’t curb emissions and temperatures continue to climb, science tells us that the results will be incomprehensible.

Microsoft is leading the way in the realm of corporate leadership, setting its Carbon Negative Pledge as a standard to follow. One of the leading voices on the Microsoft team is Vanessa Miler-Fels, Director of Energy Innovation and Impact. Her astute insights and clear way of describing the “carbon math” the Microsoft team has done to empower their own efforts and extend their approach to their own supply chain partners come through loud and clear in this conversation. Listen to hear the generous and ambitious contributions Microsoft is poised to make to the world’s energy future.

Why Microsoft feels Carbon Neutral is not enough for them

We all need to accelerate our ambitions regarding a carbon-free future. It’s not only the only workable solution for our planet’s future but is also essential if we are going to meet the goals expressed in resolutions like the Paris Agreement, which reflects the energy commitments of many organizations worldwide.

The Microsoft team believes it is uniquely positioned to use its technology resources to get on that path, but beyond that, the company’s leadership felt they could do even more than their fair share because of the resources they have at their disposal. As a result, the organization has made a “Carbon Negative” pledge, going a step further than Carbon Neutral. Microsoft intends to not only remove it’s own carbon contributions entirely but to remove carbon from the atmosphere that it has been responsible for over its 45+ year history. It’s an ambitious and doable goal you’ll learn more about in this episode.

The sustainability team at Microsoft feels the journey to its carbon-negative future is like a marathon. It’s a long haul effort. But they expect to achieve their goals through interim goals that they imagine as quarterly sprints. These sprints are highlighted through the three Scopes of emissions.

Scope 1 - a focus on Microsoft’s own house

Scope 2 - closing the loop for Microsoft through 100% renewable energy sourcing by 2025, that means for all data centers and campus facilities.

This stellar example of clean energy commitment is just the kind of thing that’s needed by organizations worldwide to not only halt the damage that’s being done to the environment but to turn things around.

How Microsoft is funding these amazing changes

Internally, Microsoft has put in place governance measures that enable the organization to keep energy concerns front and center while also motivating its myriad teams to take action on them. Each business group within the company pays a fee for the carbon emissions they are responsible for producing and this rate has been progressively increased since its implementation This has become a catalyst for change within the organization. It spurs and finances innovation that makes Microsoft’s energy initiatives possible and changes how the organization as a whole thinks about sustainability. And, perhaps best of all, it has made the long-term cost of carbon visible to Microsoft’s leadership.

But Microsoft has not stopped with internal funding, it has created a $1 billion Climate Innovation Fund. This fund will be deployed from 2021-2025 to help address the technological barriers to putting the world on the path to sustainable energy.

The team at Microsoft believes it is not enough for Microsoft alone to make these kinds of changes to its sustainability practices. The organization wants to innovate alongside other organizations to move the needle forward, faster. They believe that the solutions they are creating can be deployed at scale in cooperation with partner organizations. Cleaning their own house is where it starts but it extends to empowering and encouraging partners to move forward as well.

Governing Microsoft’s efforts in these partnerships are these three key principles:

Listen to hear the details of how Microsoft is making the goal of Carbon Negative a reality.


Connect with Vanessa Miler-Fels, Director of Energy Innovation and Impact at Microsoft

Vanessa Miler-Fels is Director of Energy Innovation and Impact at Microsoft. She works with Microsoft’s Chief Environmental Officer on cross-company energy topics engaging with our operations, customers, and supply chain. Before that, for the last five years, Vanessa worked on the CO+I Energy and Sustainability team on renewable energy procurement for Microsoft Datacenters. Before joining Microsoft, she worked at a green-infrastructure private equity fund based in London and at the French Ministry of Finance. Vanessa is French and Indian, from Paris-Pondicherry, holds a Master in international affairs from Sciences-Po Paris, an MBA from ESCP, and is a graduate of the Ecole Nationale d'Administration.

To become a Sponsor Partner of Smart Energy Voices Season 2, please reach out to [email protected] for packages, pricing and further details.