Ørsted’s Journey from Oil Giant to Most Sustainable Company in the World, with Melissa Peterson 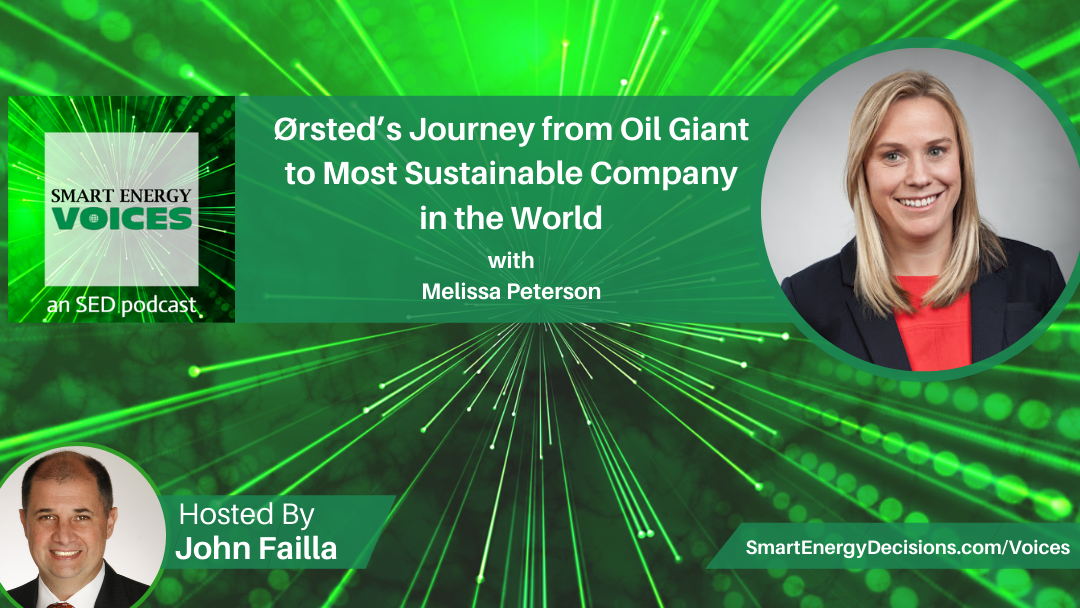 It’s not common to see a company that’s heavily vested in a particular segment of any industry make a 180-degree turn that is designed to eliminate the need for its original area of focus. It’s even more uncommon for that company to become the leader in its new niche. That’s the story of Ørsted, a Denmark-based Oil Giant that has made the transition to renewable energy like few other companies.

Joining SEV host John Failla on this episode is Melissa Peterson, VP of Origination and Power Marketing at Ørsetead North America. She recounts the reasons and the ways that her company has made the transition to renewables, how it has moved into the U.S. market, and what the company is moving toward in years to come. She also comments on the future of renewable energy in the United States and reflects on her personal journey in the industry. Don’t miss it.

The Ørstead story is inspiring because it is one of overcoming the way things have always been done, both organizationally and within its industry. It also shows how one company has triumphed over obstacles that at times seemed insurmountable. The company’s achievements are well-recognized, being named the “Most Sustainable Company in the World.” Melissa points out three reasons that title was earned...

The scale of the transformation Ørsted made was huge, and it was done fairly rapidly. The company made its 85/15 pledge in which it gave itself 30 years to reverse its carbon emissions from 85% to 15%. They did it in 10 years.

Since 2006 the company has reduced its CO2 emissions by 86%. That’s massive for any company but even more impressive when said about a company that has traditionally been a producer of oil and gas.

Ørsted is also committed to being carbon neutral by 2040 and that goal stretches beyond its own operations. The company desires to meet that goal both up and down its entire supply chain. Listen to hear how Melissa describes these accomplishments and goals, and be inspired by what your organization may be able to achieve.

Where the U.S. renewable energy industry is headed

Melissa has a very interesting perspective from which to view the course of the renewable energy industry in the United States. Her company has vast experience in Europe and in particular segments of the RE industry that are not as prevalent in the U.S. Now that she’s filling a significant role in Ørsted’s U.S. operations, she’s able to draw on that experience and knowledge and apply it to her work in the U.S. She says there are four areas where she sees the U.S. market growing in the next decade:

Hydrogen: She admits that this source of energy is a long-term play, but insists hydrogen fuel will be vital in reducing dependence on carbon-based technologies.

Storage: Battery storage will need to become a reality, on a massive scale. It will be critical for capturing the energy produced by renewables during peak production hours and for relieving constraints caused by limited transmission capabilities.

AI and Big Data: These technologies will help to improve efficiency, enable operators to learn how to better run their facilities, will reduce downtime, and will serve to improve worker safety. This will lead to greater optimization of renewable energy resources.

Infrastructure improvements or Grid Modernization has got to occur. Without it, the supply side of the renewable energy equation will not be able to keep up with demand. As corporates get more involved, collaboration will be key for achieving the needed improvements.

The renewable energy industry is one that’s making a difference

As they wrapped up this engaging conversation, John and Melissa spoke about the high points and challenges of Melissa’s career. She’s seen a great deal of change, growth, and promise within the industry over the last 15 years. She’s committed so much of her career to the industry because she loves to demonstrate how companies can be profitable, reduce climate change, and leave the world a better place.

She often thinks of the impact her work is having on her own children’s future. She wants them to be able to enjoy the outdoors and the riches of our planet the way she has. “It’s an honor to work in this industry and an honor to work at a company like Ørsted.” Listen to learn how this Oil Giant made the renewable energy transition and use its story as fuel for creating your own.

To become a Sponsor Partner of Smart Energy Voices Season 2, please reach out to [email protected] for packages, pricing and further details.

Melissa leads the Origination and Power Marketing team at Ørsted Onoshare North America. She directly manages a team of originators while also creating and sustaining lasting strategic relationships across multiple customer verticals within the power industry. Prior to joining Ørsted, she spent five years on Apex Clean Energy’s business development team and five years as a project developer for EDF. Melissa has developed over 1000 MW operating renewable energy projects. Melissa holds a Master’s degree from SUNY-Albany and a Bachelor’s degree from the University of Wisconsin-Eau Claire.