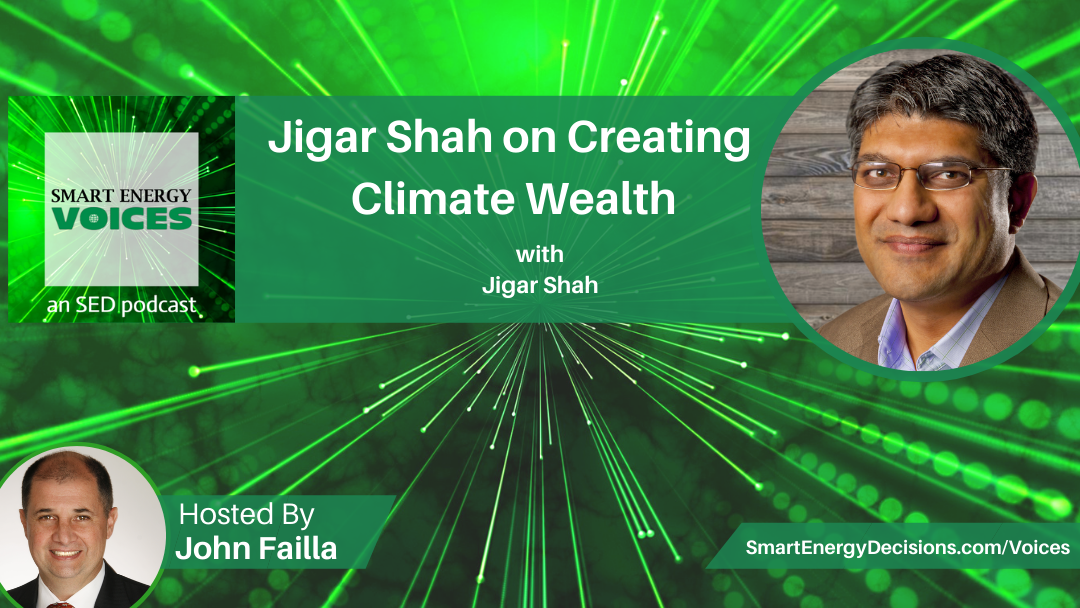 Celebrate the fifth anniversary of Smart Energy Decisions with this conversation between Founder and Editorial Direction John Failla and clean energy industry pioneer Jigar Shah, who has changed the way businesses approach technology to both save money and improve their impact on the environment.

Jigar, who is currently President and Co-founder of Generate Capital, is the creator of “no money down solar.” While sustainable energy was once viewed as a money pit with benefits to the environment coming at the expense of the company, this innovation paved the way for businesses to access renewable energy – and enabled SunEdison to become the largest solar services company in the world.

Join John and Jigar for surprising insights on Jigar’s career in the energy space, and his thoughts on where it is headed.

How did Jigar become a leader in sustainable energy?

In this episode, John speaks with Jigar about his life-long journey to environmental change. Jigar had been on that path for years. Though his thoughts weren’t yet organized, writing his book brought everything together in a comprehensive way. At that time, impact investing was considered to be a sacrificial move without consideration of a return. But Jigar knew it could be worth so much more. Investing in the environment should be profitable. And, if businesses could experience the effectiveness of green energy, they’d be excited to jump on board.

What does the cost of renewable energy look like?

As with any technology, the more renewable energy is used, the more is learned. The process will become more streamlined as newer and better equipment is created. Jigar says that’s what is going to reduce the cost of green technologies. Once the cost structure comes down, more applications will be found. Such is the case with green hydrogen. For example, Plug Power’s fuel cell block is now able to be mass manufactured. Their production cost is coming down faster than 5-megawatt fuel cells made by other companies. Jiger wants companies to copy what he’s doing and make renewable energy more common. More companies being involved means exponential, positive impact on the environment.

What’s next for Generate Capital?

Originally considered a specialty finance company, Generate Capital is now known as a sustainable infrastructure platform. If something in an investment goes wrong, they have a responsibility to resolve that issue. As a result, they also help with leadership development within the companies that use their platform. How do they maintain their position as a strong company? Before investing, they check that a company has proven technology, customers in place, a known supply of feedstock, and a solid operating history with the ability to scale. Success in sustainable energy depends on local government, community support, and the stability of businesses.

The future of Generate Capital will be a continuation of their proven methods: finding reliable ways to increase profits while reducing environmental impact. Other companies will need help getting from one level to the next. Generate Capital will provide the boost for the company to move in the right direction. When a company realizes how self-reliant it can be, it has the freedom to operate in confidence.

Jigar Shah is the President and Co-Founder of Generate Capital, the leading investment and operating platform for sustainable infrastructure. Founded in 2014, Generate Capital is the only “one-stop-shop” for pioneers leading the Resource Revolution. Prior to Generate, as the Founder and CEO of SunEdison (NASDAQ: SUNE), Shah pioneered “no money down solar”, which unlocked a multi-billion-dollar solar market and became the largest solar services company worldwide before its acquisition by MEMC. Shah’s decades of experience in renewable energy consistently show that business model innovation and entrepreneurship are two of the keys to proving that sustainability pays.