The Future of GM, EVs and Renewables with Rob Threlkeld 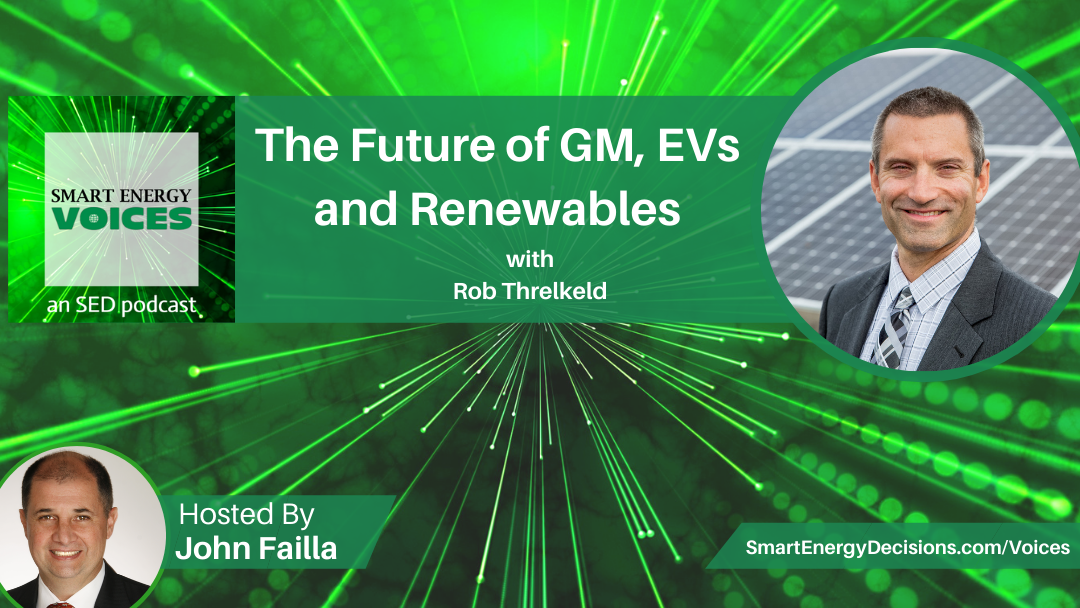 The future of decarbonization is in re-inventing the transportation industry. As it stands, vehicles account for 28.2 percent of greenhouse emissions. That’s an amazing opportunity for change. Imagine the reduction in carbon emissions if those vehicles were to be powered by electricity. John speaks about the potential of electric vehicles with General Motors’ Global Manager of Sustainable Energy, Supply, and Reliability, Rob Threlkeld. John and Rob discuss GM’s incredible carbon neutrality goal. GM wants to do its part to get the whole world involved in its future. Every company will want to join in this movement to create a cleaner future.

That’s something General Motors is going to find out! GM has committed to carbon neutrality by 2040. While this recent announcement is new, it’s a representation of the work GM has been doing for years. They’ve spent the last couple of decades finding ways to reduce carbon emissions. GM had success with EV1 in the 1990s and the Chevy Volt a few years ago. Now the company has decided to go “all-in” on sustainable energy.

To accomplish their goal, GM has to move away from the combustion engine. The transportation industry is the largest carbon emitter in the world. Both manufacturing and running a vehicle require a lot of energy. To counter this, GM has a goal of eliminating the combustion engine from their product line by 2035. The potential developments of the next decade are overwhelmingly exciting. Future generations are heading toward an all-electric future, transportation will be cleaner, and new energy solutions will be discovered along the way.

Cost reduction is necessary for an all-electric automobile future. GM is developing a battery that will help by reducing production costs by about 60%. Having lower costs of energy will allow electric vehicles to be priced competitively. That being said, design is the first step in creating a low-cost, versatile product. By developing vehicles with a modular design, GM can allow for adaptability among models. The more interchangeable the technology is, the cheaper products will be to manufacture.

The increased interest in the renewable energy movement is spurring more involvement from legislators and utility companies. Laws are being passed that promote green changes. Energy companies are being encouraged by communities to produce clean energy. Across the energy industry, the consensus is to provide a better product for a better environment. Involving those who are outside of the energy industry will accelerate the process toward a greener future.

The four pillars of GM’s approach

GM is focusing on four pillars for renewable energy: energy efficiency, procurement, energy storage, and policies to support the development of renewables. By taking these into account, they’ve been able to narrow their focus to higher impact areas such as the U.S. and Mexico. Rob used these pillars to better package the idea of committing to 100% renewable energy. GM uses the four pillars as a definition for what renewable energy is. Rather than ending their focus on manufacturing, they want to positively impact all aspects of their production. GM is a great example of a company working to reach above and beyond its typical sphere of influence.

Rob Threlkeld is the Global Manager of Sustainable Energy, Supply, and Reliability at General Motors. Threlkeld leads GM’s energy procurement efforts including its commitment to meet the electricity needs of its global operations with 100 percent renewable energy by 2040.

He is also responsible for leading the team that supports GM energy procurement and regulatory efforts, including negotiating power purchase agreements, natural gas, green tariffs and engineering onsite renewable solutions for the company’s facilities across the globe. Threlkeld’s path to managing GM's global renewable energy strategy began with a love for pancakes, when he learned in second grade that acid rain affected the production of maple syrup.

Threlkeld received both his bachelor’s and a master’s degree in civil engineering from Purdue University.