The Energy Switch, with Peter Kelly-Detwiler 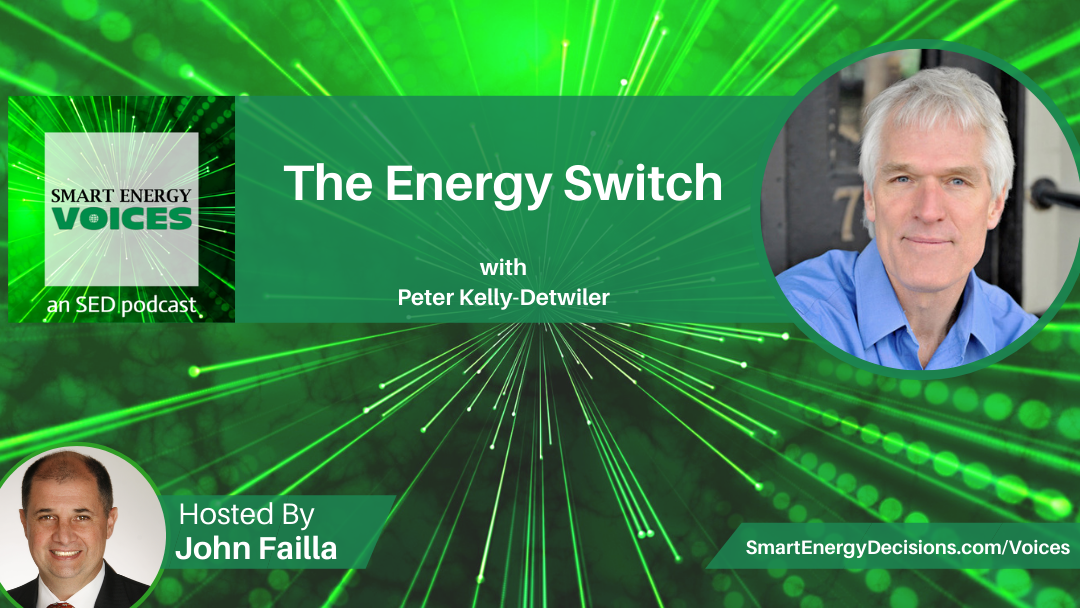 In this episode of Smart Energy Voices, host John Failla is joined by his friend and colleague Peter Kelly-Detwiler, founder of NorthBridge Energy Partners. Peter is an active faculty member of Smart Energy Decisions and has decades of experience in the energy industry. Join as John and Peter discuss Peter’s new book: The Energy Switch.

The journey to “The Energy Switch”

Peter Kelly-Detwiler has been in the electric industry for 30 years. Starting as a consultant for the Cree Indians, he next spent a few years in Chile, then came back to the USA and worked in competitive retail energy markets. From there, he moved into starting up Constellation Energy, where they paid large customers not to use energy during periods of peak demand. In 2012, Peter took severance from Epsilon/Constellation and began his modern life. He was curious to figure out how all the aspects of the grid were going to start working together. In his hunt for information, he wrote hundreds of Forbes articles, which led him to begin working with SED.

Eventually, Peter felt as though he had written enough articles that he had a good picture of the industry. During his research, he had tried to find a single source, document, or conversation that would help him put all his thoughts together, but he couldn’t find what he was seeking. So he decided to create this resource himself, framing and contextualizing concepts to be understandable to readers.

While writing, Peter tried to maintain the perspective of what it was like not to know what he had learned. Thinking in this way, he could make technically complex information accessible to everyone. By attaching the concepts to people, Peter was able to use stories to onramp the nuances and complexities of whatever space they inhabited.

In his book, Peter lists four stages that are necessary for grid change. The first step is changing the grid to be able to manage supply and demand instantaneously. Second, many renewables have to be introduced into the system. The third step is changing the negative covariance. Fourth is bringing in longer-duration resources. Creating these resources is what California is doing with their new RFPs, and other companies are doing this with liquid air. Ultimately these changes will get companies to about 70-80%. Part of the struggle of the fourth step is what to do from a seasonal perspective. Storage is needed to move vast amounts of power, which is likely a role for hydrogen.

Due to long-duration storage issues, the most significant gap in progress is in the last 25%. While possible conceptually, the solution is yet to be found, and the focus will need to shift to new technologies. As the path is navigated, new ideas will surface that will bridge the last gap.

One example of the direction of change is the increasing electric vehicle sales. In the future, gigawatt-hours or terawatt-hours of energy are expected to be driving around on wheels. However, these batteries do nothing while the vehicles aren’t being used. Companies like Volkswagen say they will make all of their vehicles bidirectional by next year to create more use for these batteries. Ford’s F150 Lightning will be capable of plugging into homes and providing backup power in the event of outages. Bringing that power back to the grid will create a product people want while helping the energy transition.

Peter Kelly-Detwiler - Smart Energy Decisions’ Director of Educational Programming and Principal of NorthBridge Energy Partners - has 30 years of experience in the electric energy arena, with much of his career in competitive power markets.  He’s currently a leading consultant in the electric industry, providing strategic advice to clients and investors, helping them to navigate the rapid evolution of the electric power grid.  Mr. Kelly-Detwiler offers numerous keynotes and workshops on a wide range of topics.  He has also written widely on energy issues for Forbes.com and GE, with over 300 articles to his credit.  His book on the transformation of electric power markets - “The Energy Switch” - will be published by Prometheus Books in June of 2021.