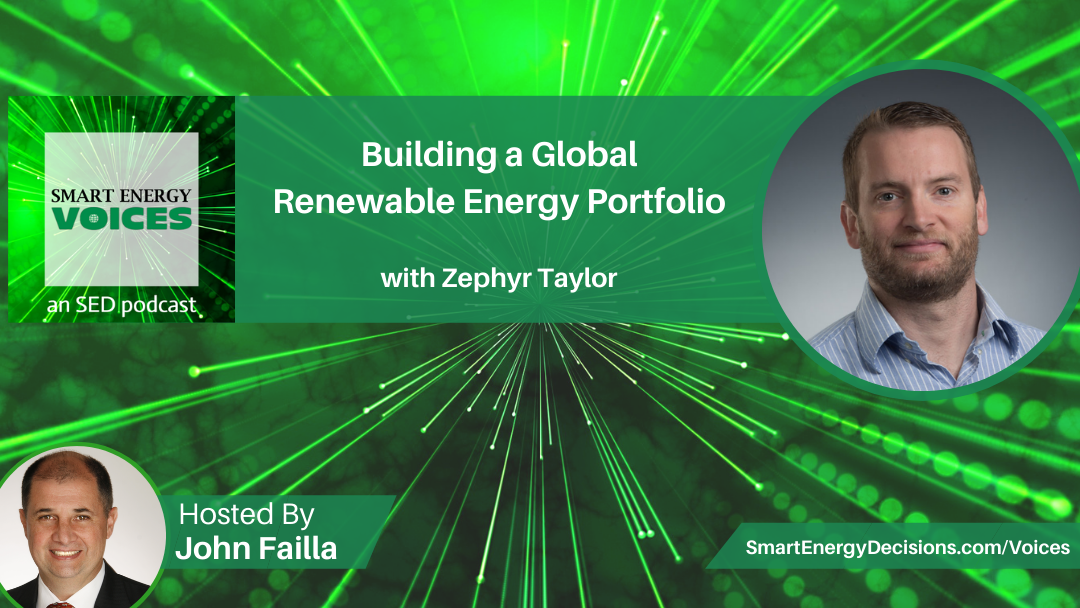 In this episode of Smart Energy Voices, host John Failla is joined by Zephyr Taylor, Global Director of Renewable Energy, Mars Inc. This engaging conversation took place during Smart Energy Decisions’ Renewable Energy Forum. They discussed Mars’ progress against its “Sustainable in a Generation” plan and its ambitious emissions reduction and renewable energy goals. Listen to hear more about Zephyr’s work at Mars and for bonus content exclusive to this episode only!

Sustainable in a Generation

Mars’ “Sustainable in a Generation” plan encompasses two key categories: a healthy planet and healthy people. As a renewable energy commercial head, Zephyr supports the healthy planet/ environmental side of the equation. The first goal for the company’s sustainability initiative is decarbonization. Their internal goal is 67% by 2050 of all of their emissions, and, 100% of Scope 1 and 2 emissions by 2040. Renewable energy is the strategy Mars is using to address most of their Scope 1 and 2 emissions, pursuing these deals because most of their direct emissions come from energy usage.

Mars’ renewable energy targets include their thermal usage, principally natural gas burned for industrial processes in gas boilers at their factories. This problem is a fundamentally different challenge than solving renewable electricity needs from a commercial and technological perspective. That energy subsector is in a much earlier stage, with pilot projects such as hydrogen and anaerobic digesters. Because of its unique challenge, renewable thermal will become an increasingly disproportionate part of Zephyr’s day. He looks forward to being part of Mars’ finding the most viable commercial models to replace fossil gas and integrate into their global portfolio.

The U.S. was Mars’ first market to make a major power purchase agreement. In 2015, that came in the form of a large wind farm in Texas that covered 100% of Mars’ electricity needs in the country. That set in motion the global perspective of addressing renewable energy needs through large, offsite deals. In countries where offsite deals aren’t available, Mars looks for alternative deal structuring options such as onsite, behind the meter, and shorter-term compilations to achieve as much renewable energy coverage as possible. There are some commonalities in the approach to evaluating different markets and renewable energy deal structures - but to a large degree, that’s where the commonality ends.

Energy and renewables are some of the most hyper-localized markets and sectors for any commodity. The way energy is bought and sold, key market participants, the counterparties to any deal, and the regulatory environment differ drastically between markets, especially in less regulated markets. The intriguing aspect is that there can be situations where there are markets with a developed renewable energy sector from some perspectives. However, the regulatory, commercial, and contracting environments are such that you can’t easily contract bilaterally. The processes from one market aren’t going to transpose smoothly into another. Every individual market requires a unique approach to do the market assessment and to understand the market risk and design to get the best deal for your company.

Zephyr has led the development and execution of strategic renewable energy initiatives for the public and private sectors globally. His expertise includes policy and regulation, project development and transaction structuring, and thought leadership on energy market reform and stakeholder mobilization.

Zephyr holds an MBA and a Master of Environmental Management from Yale University. He received his undergraduate degree with Highest Honors in Economics from the University of North Carolina at Chapel Hill.