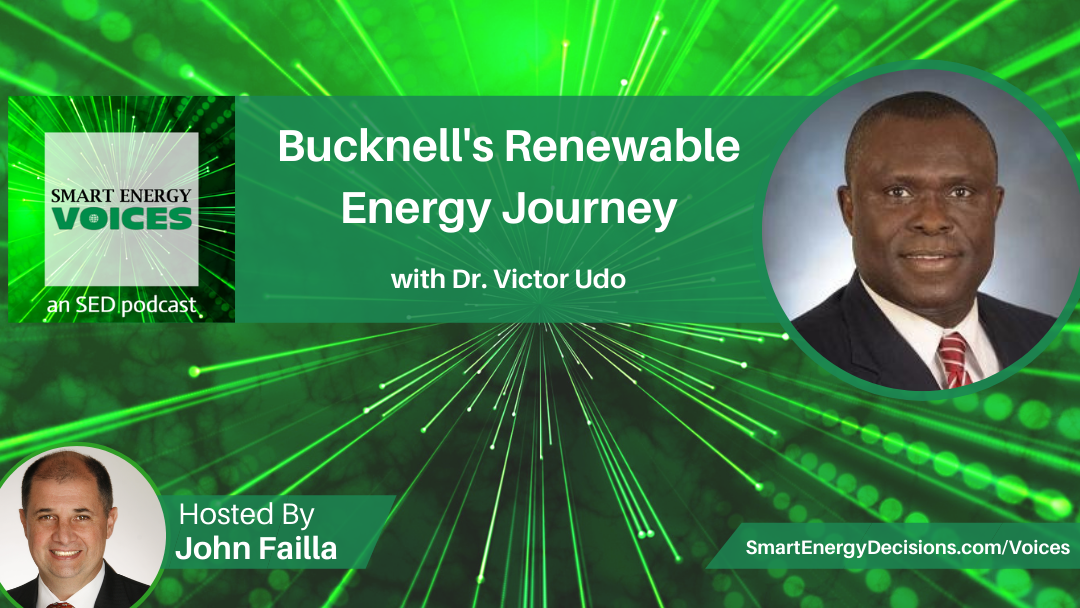 In this episode of Smart Energy Voices, host John Failla speaks with Victor Udo, Bucknell University’s Director of Sustainability. Bucknell University recently announced a 7-acre solar array on the campus. Victor explains how the project came about, how it fits in with their overall sustainability strategy, and what was needed to overcome the sometimes contentious process to gain local ordinance to proceed. This episode is a must-listen for other large power users, especially in higher education.

Victor is a Nigerian-born American. He started in a battery manufacturing plant in Nigeria through a company in Germany and is excited to see the industry go back to batteries, which he sees as the future of capturing renewable energy. Victor studied in the U.S. at a small school in Birmingham, Alabama. He went on to Howard University, where he worked in a lab with one of his professors. At that time, renewable energy was a thing of the future. After finishing his master’s degree, he was given the opportunity to work for Atlantic City Electric, eventually purchased by Pepco.

When Victor had worked for Pepco for several years, his governor in Nigeria asked him to go back and help with the power infrastructure there, serving about 6 million people. He spent seven years in Akwa Ibom State, Nigeria. After coming back to the U.S., Victor was offered a position with Bucknell University as the Director of Sustainability. He currently works with the students, faculty, staff, and administration to make sure Bucknell has a solid strategy. They’re developing a ten-year plan to help the university become carbon neutral by 2030. They are also doing their part in restoring the ecology by planting trees.

Sustainability is something that Bucknell has been involved with for a long time. When Victor joined them, there was a lot that was already going on. In 2008, the university had already committed to becoming carbon neutral. His assignment was to create a sustainability plan focused on carbon neutrality, reducing waste, and encouraging biodiversity and natural habitats. They began by clearly defined terms and what they would do and decided what to do about carbon neutrality. Strategies they discussed were enhancing efficiency, powering the campus, and carbon pricing.

Planning a trajectory with unknown factors

Bucknell is creating a roadmap for their carbon neutral by 2030 goal, which should be completed in the next one or two years. They don’t have all the answers yet. Technology isn’t where it needs to be, and there will be financial implications. Also, they don’t know yet what offsets might be acceptable or what their community will prefer. They’re looking at all options that will help them to become both carbon neutral and budget neutral. As with many organizations who have made carbon reduction commitments, Bucknell is in the process of figuring things out as they go.

Dr. Udo is a former CEO with international sustainability and utility processes leadership in academia, state and local governments, and Fortune 500 corporate energy companies. He has significant experience in identifying, analyzing, and incorporating global energy, economic, environmental, and educational trends into both public and private sector governance and infrastructure management.

He is passionate about the convergence of renewable energy resources and storage, electrification of transportation, AI, IoT, and Blockchain in the decarbonization, decentralization, and digitalization of business, academic, and public policy processes.