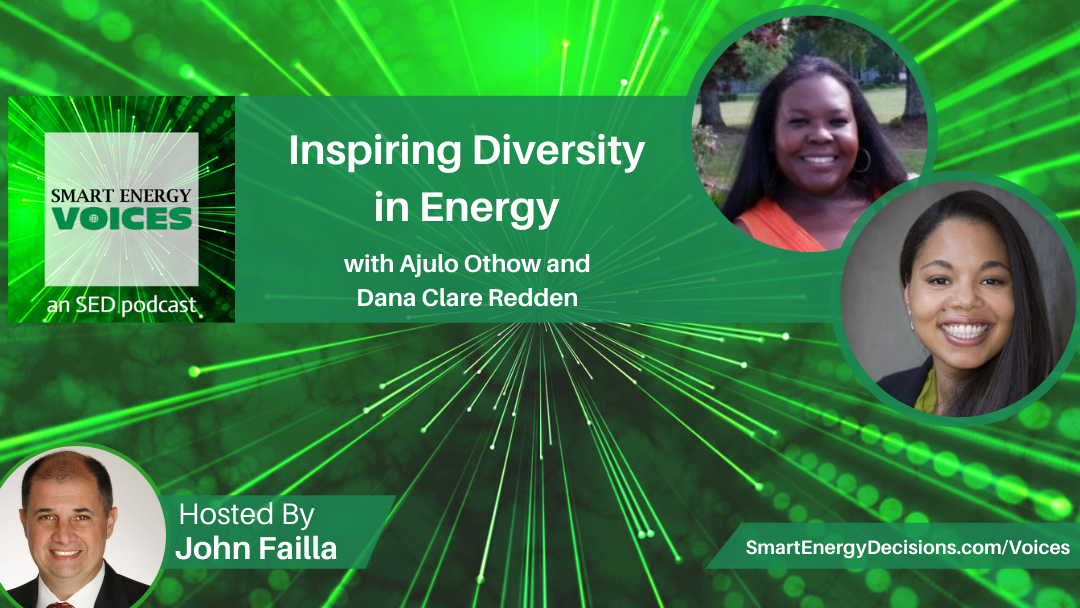 This episode of Smart Energy Voices continues our series on Inspiring Diversity in Energy with a panel from the recent Renewable Energy Forum. Smart Energy Decisions’ Debra Chanil sat down with Ajulo Othow, co-founder and CEO of EnerWealth Solutions, LLC, and Dana Clare Redden, founder of Solar Stewards. With this experience in creating companies in the solar space, they’ll discuss the challenges of entrepreneurship and what they think is needed to bring more diversity to the solar industry. Listen in to learn what you can do to help inspire diversity.

Diversity in the boardroom

The topic of diversity has been front of mind for quite some time. The discrimination and barriers have been very stark. One example is the number of anecdotes about women in board meetings voicing some expertise that no one acknowledges, followed by a male counterpart expressing the same idea - and having it be accepted. These types of experiences, micro-aggressions, and full-out discrimination are a very impactful part of anyone’s journey who experiences them. That’s why Dana feels that the work she and Ajulo are doing is so important. They must tell their stories to make things better for those coming along the path. There’s always a challenge to leverage that experience towards something good, and the good certainly exists. It’s an opportunity to zero in on those allies who see the value in others. Diversity is an ongoing conversation and opportunity to recognize the advantages to be gained by having a diverse team.

There is plenty of conversation to be had about how to accomplish the energy transition. However, there is a much more nuanced conversation around our transition to clean energy that is also important to have. There is a way in which carbon reduction occurs that reinforces the same sorts of inequities and leaves behind coal communities and others heavily reliant on fossil fuel industries in general. There needs to be much more discussion about how to make this transition equitable. The Biden Administration’s Justice 40 Initiative - focusing on delivering 40% of overall benefits of federal investments addressing the climate crisis to disadvantaged communities and the establishment of an Environmental Justice Scorecard - is a much broader effort than we’ve had before.

It’s of critical importance for this nation to make it a priority to have greater resiliency in communities. That can be accomplished in several ways, but distributed generation is one of the easiest. FERC 2222 served as the signal to the market that DERs have a place within a big, strategic energy plan. Dana’s motivation is to make sure that those assets are located in communities of color to gain the benefits. Dana believes that every private sector actor who has a sustainability goal should have an environmental justice goal included within that.

What is needed to encourage diversity in solar?

Giving communities the opportunity to see solar as an excellent career and a solution in their neighborhoods is a first step. People get excited at the possibilities of solar, but they have to learn about it first. Having visibility of the people in solar is encouraging as well. For a young person, seeing Ajulo, Dana, or people in AABE (American Association of Blacks in Energy) will help them become engaged with the solar industry. The more open and welcoming this space is to all sorts of talent, the better off everyone will be in terms of saving the planet.

Celebrating over a decade in the solar industry, Dana Clare Redden is a passionate solar professional dedicated to the development of distributed generation solar globally.   Growing up in a small rust-belt town in western Pennsylvania, the environmental impacts of fossil fuels shaped her perspective, particularly for disenfranchised communities and those most vulnerable.  Realizing this need for environmental justice and greater resources, Dana founded Solar Stewards, a social enterprise connecting corporate social responsibility initiatives with schools and universities, affordable and senior housing, places of worship, and nonprofits in marginalized communities.  Dana holds a Bachelors of Science degree from Drexel University as well as an Executive MBA from IE Business School and Brown University.  She is among GRIST Magazine’s 50 Fixers, a two-time judge at the DOE/NREL Solar District Cup, and an ACORE Accelerate member.  She currently resides in Atlanta, GA where she continues to work at the intersection of climate action, environmental justice, and social entrepreneurship for communities worldwide.

Ajulo Elisabeth Othow grew up amidst southern traditions in her home state of North Carolina. Her parents, both teachers, imbued her with a love and caring for others as she prepared herself educationally to succeed in her chosen career. At a young age and as she grew into maturity, she traveled with her parents to continents outside of North America, where she became conscious of national and international conditions of humanity. Ms. Othow is now an attorney practicing in Granville County. Ms. Othow is also a solar project developer, one of the only women of color solar developers in the nation; her projects are designed to aid in minority land retention and rural economic development. For more than fourteen years prior to becoming an attorney, she worked with people in small towns across all thirteen southeastern United States, places where people’s one hope is for a future where their children can return home and live a good life.

Ms. Othow holds a Master’s Degree in International Development from George Washington University, further graduate work in Public Policy from Duke University, and a Doctorate of Jurisprudence from Northeastern University School of Law. Ms. Othow lives in Oxford, NC with her young son, and mother.