The Power of Entrepreneurial Leadership, with Chris Castro 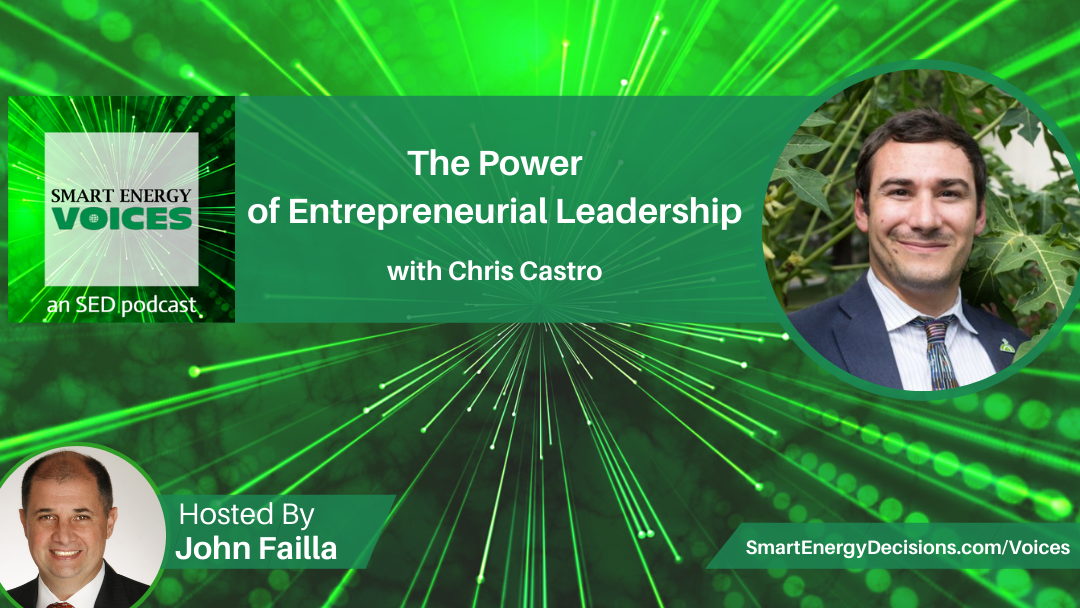 In this episode of Smart Energy Voices, host John Failla is joined by Chris Castro, Director of Sustainability & Resilience and Co-Chair of the ‘Future-Ready’ initiative for the City of Orlando. Chris has accomplished a tremendous amount with the city in an amazingly brief time. Listen in to learn more about the thrilling work Chris is currently doing and about this fascinating personal journey in the field of sustainability.

Chris in the City of Orlando

Over the last seven and a half years, Chris has had the privilege to work as the Senior Adviser to Orlando mayor Buddy Dyer and direct the Office of Sustainability and Resilience. He oversees some exciting policy interventions, program developments, and partnerships that are being established to advance the overall vision of Orlando. The city’s work is securing its status as one of the most environmentally friendly, socially equitable, inclusive, and economically vibrant cities in the 21st century.

Changing people’s behaviors is extremely difficult to do. Changing the behaviors of an institution like a city that’s been around for hundreds of years adds a whole new level of complexity. That’s the genuine challenge that municipal government leaders like Chris and public officials are trying to address. Florida has had leadership that called climate change a hoax and made legislative sustainability measures banned or illegal. Now Florida has leadership focused on preemptions and stripping local governments’ home rule to address some of the most significant issues. In the recent legislative session, Congress and Florida’s governor signed a preemption bill regulating energy systems within Florida’s cities.

A city might have a strong mayor who says that sustainability is a priority. Initiatives will be created — and then a new mayor with a different initiative takes office, and efforts are shifted elsewhere. When Chris began working with the City of Orlando, he started the process of institutionalizing sustainability in the city. He helped the city create an office in the executive department. Now Orlando’s ordinance has a specific chapter focused on sustainability and resilience, and it calls for a Director in the Office of Sustainability. They also have a chapter in internal policies and procedures focused on sustainability that specifically calls out this office. Importantly, they’ve created long-term permanence of this work beyond the mayor’s term.

Chris now oversees an office of thirteen individuals. He describes his office as a sustainability consulting firm. Their role is to help the Chief of Police, the Chief of Fire, the Head of Public Works, and the Streets and Stormwater Department implement and change operational procedures to ensure that the city is moving towards its sustainability goals. This model for how a city can transition towards a zero-carbon economy has made Orlando one of the leading cities advancing sustainability.

Chris serves as the Senior Advisor to Orlando Mayor Buddy Dyer, Director of Sustainability & Resilience, and 'Future-Ready' steering committee member at the City of Orlando — developing a comprehensive set of policies & programs that has turned Orlando into one of the leading cities in America accelerating sustainability, resiliency, and climate action. Chris is best known for his entrepreneurial efforts prior to coming to the City, including as Co-founder and President of the global sustainability nonprofit, IDEAS For Us, a clean energy consulting firm Citizen Energy, and a renowned urban farming social enterprise Fleet Farming. In 2020, Chris also joined partners to launch ‘Climate First Bank’, the first B-Corp community bank in Florida working to advance ESG and local sustainable investing. Outside of work, Chris serves on many nonprofit and academic boards, including the UCF Energy Research Center, US Green Building Council of Florida, Project Greenschools, and Goodwill Industries of Central Florida. In December 2018, Chris starred in the National Geographic documentary on climate change called "Paris to Pittsburgh" to share the Orlando journey on climate action with millions of people around the World.