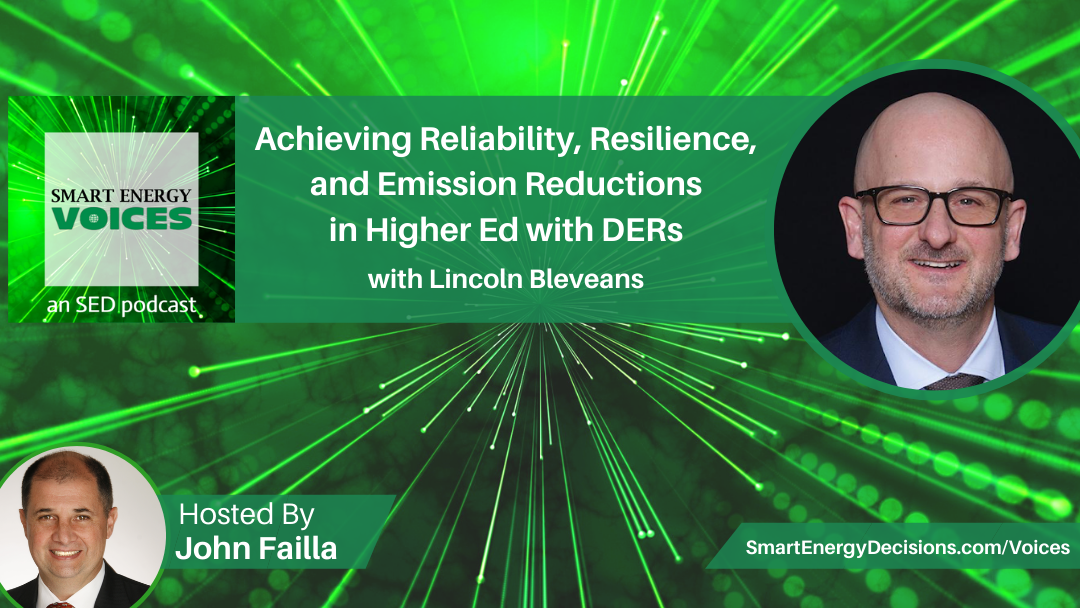 In this episode of Smart Energy Voices, SED's Debra Chanil discusses distributed energy resources in higher education with Lincoln Bleveans, Executive Director, Sustainability & Energy Management at Stanford University. DERs in higher education is a complex topic that can be overwhelming. Lincoln addresses the challenges of energy reliability, resilience, and creating a granular room-to-room energy plan. He also discusses the unique intersection between the university and Silicon Valley. You won’t want to miss his insightful observations.

As the Executive Director of Sustainability and Energy Management at Stanford University, Lincoln is in charge of energy, water, and the Office of Sustainability. Lincoln oversees everything from 24/7 operations to the long-term planning and positioning of investments to keep the university at the cutting edge. Stanford is one of the few sustainable universities in the world that has a platinum rating from AASHE.

Stanford has established zero-carbon goals for its energy supply - that includes not just electricity to the campus, but also electricity that drives a $600 million thermal plant that is the heart of the campus, making both chilled and hot water. Stanford currently has two power purchase agreements with solar farms in California, which will bring the campus to more than 100% renewable in its electric supply as of the middle of 2022. The university also has a goal of zero waste by 2030.

For many years, Stanford had a cogeneration facility, a standard gas turbine, providing both an electric supply to the campus and on-site generation. It also provided a tremendous amount of steam, which drove the heating and cooling system for the entire campus. Stanford had an interesting problem to solve when the plant reached the end of its life: How do they replace that energy source while moving forward with a more environmentally sensitive solution?

Stanford determined that they didn’t need power generation on-site or to continue using steam. Instead, they decided they could meet their needs more cost-effectively with hot and chilled water. This conversion required dozens of miles in piping and re-engineering devices for hot and cold water input. Stanford is currently doubling the chiller capacity to match the rapid campus growth and because the climate curve has been steeper than initially expected.

Stanford is fortunate to be on the cusp of reaching 100% renewable energy. At the same time, they’re dependent on a grid that isn’t under their control, including two interconnections with the California ISO through Pacific Gas and Electric. One of the significant challenges Lincoln faces in his role is figuring out reliability in the context of intensive electrification and decarbonization.

Right now, having diesel generators for emergencies is necessary from a building code perspective but it doesn’t make sense for Stanford’s broader greenhouse gas goals and is an issue they’re trying to figure out. Lincoln views the campus as a microgrid facing that challenge, similar to how hospitals face the same challenge. Obtaining reliability and resilience while simultaneously decarbonizing is one of the big and exciting challenges many are facing now and in the future.

Lincoln Bleveans has been an executive in the global energy industry for over 25 years, focused on electric power and sustainability. His experience spans the globe and the energy value chain, from emerging technologies to independent power project (IPP) development to utility operations. He is an internationally recognized thought-leader, writer, and speaker on energy and sustainability. He is now Executive Director of Sustainability & Energy Management at Stanford University, leading the University's mission-critical operations and world-leading innovation and operations in sustainability, electricity, thermal energy, building energy management, water, and waste.  Most recently, he was an executive at Burbank Water & Power, an innovative and high-performing electric and water utility in southern California. He is active as a mentor, advisor, and board for technology start-ups, infrastructure projects, and non-profits.