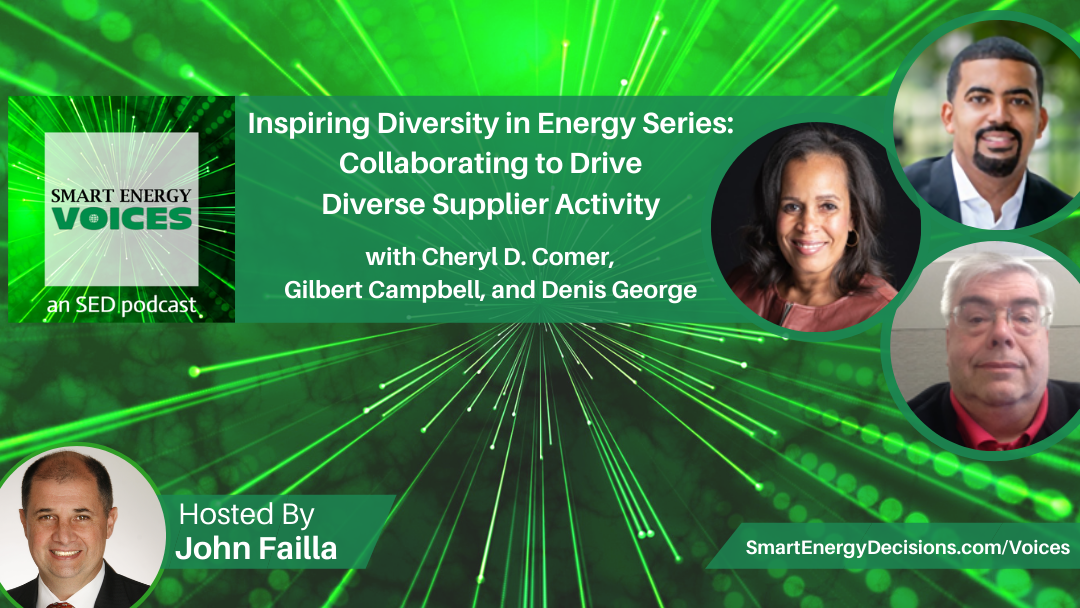 Humankind is in a race against time to save the planet. Innovation and transformation need to happen. Different mindsets and thought processes working together bring value and best-in-class ideas to the table. Collaboration provides an excellent opportunity to get to know key stakeholders in other communities and become exposed to new ideas. For example, social justice and a PPA would never have been correlated before, but amazingly and effectively, they are now. Diversity focuses on connecting people in various communities so such ideas can develop and expand.

The creation of DiCE was prompted when T Mobile became one of Cheryl’s strategic accounts. Amy Bond, Energy Procurement Program Manager - T Mobile, asked Cheryl how Duke Energy interacts with diverse suppliers. In response, Duke Energy held a two-day roundtable discussion about tracking diverse suppliers. They realized that corporations don't usually share contacts when they have them. The communication that did happen was limited to word of mouth.

Duke’s vision of DiCE is to open doors, utilize, and amplify the stories of diverse suppliers. One of DiCE's key objectives is to create a database or repository for diverse suppliers, which is being sponsored by Microsoft. They want to ensure that the energy industry has a good database without systemic barriers. While DiCE is growing, it's running on a two-year pilot in a smaller nexus with Kroger, T Mobile, Microsoft, and diverse suppliers. There is significant interest from organizations that want to join. Meanwhile, they can raise awareness and take action in their own space.

Justice in the environment

Environmental Justice PPAs are Volt Energy's response to ensure that rural communities aren't left behind in the transition to clean energy. Volt Energy prioritizes developing projects in economically disadvantaged rural areas, particularly where fossil fuel plants have been shut down, to help with economic revitalization. They also recognize the plight of many minority communities that haven't had access to participate in the clean energy boom.

Volt Energy explains that these communities have risked their lives for the last 100 years to ensure everyone has power. They've dealt with environmental injustice in basic necessities like clean water and air. As power plants are shutting down in a transition to clean energy, it's fair to prioritize those communities.

Gilbert Campbell is the Founder and CEO of Volt Energy Utility, a national renewable energy firm that finances and develops utility-scale solar and energy storage projects for large corporate clients, municipalities, and other institutions.

Gilbert serves on the Board of Directors at The Solar Energy Industries Association (SEIA), The Renewable Energy Buyers Alliance (REBA), The American Association of Blacks in Energy (AABE), is an Advisory Board Member at 3Degrees, and is a Founding Member of Renewables Forward.

Gilbert is an advocate and spokesperson for diversity, equity, and inclusion in clean energy, environmental justice, and sustainability; and regularly advises federal and local officials, corporations, and other key stakeholders on policies and best practices. Gilbert has been nationally recognized for his efforts and has testified before Congress regarding the need for increased minority participation in the renewable energy sector.

In 2016, the Obama Administration presented Gilbert with the White House Champions of Change Award for his leadership in advancing climate change equity. Gilbert was named to EBONY magazine’s 2014 Power 100 List, which recognizes influential achievements by African Americans annually. Under Gilbert’s leadership, Volt is a 2014 recipient of Amtrak and The Washington Wizards Pioneer Award, which honors companies that have made a positive impact in their community. Realizing that change begins with preparation Gilbert has been a vocal proponent of STEM education and outreach opportunities for young people across the country.

Cheryl Comer is a Strategic Account Manager in the Sales and Relationship Management organization at Duke Energy Sustainable Solutions. She is responsible for developing and sustaining long-term strategic customer relationships for mutual growth, profitability, trust, loyalty, and risk management. Her assigned strategic accounts are FedEx, Kroger, Microsoft, and T-Mobile. Cheryl brings a wealth of experience from the education and legal industries.

In addition to teaching middle school and high school students music theory, solfeggio, string, symphony orchestra, and music history, Cheryl served as a high school principal of an alternative school in Phoenix, Arizona. She managed a school of 350 students and 30 staff members. During her tenure as principal, she learned to effectively balance considerations from competing stakeholders such as state mandates, instructional and support staff, parents, students, and community. Under her leadership, graduation rates and test scores increased. Cheryl is also a licensed attorney in North Carolina and Louisiana and practiced law at a mid-sized litigation boutique in downtown New Orleans before joining Duke Energy in 2018. She continues to practice law in the capacity of a pro bono attorney with Legal Aid of North Carolina and often lends a hand to family and friends when in need of sound legal advice. She is a community activist in Gaston County and Diversity, Equity, and Inclusion champion.

Cheryl’s first love, however, is the cello. She began playing in an exploratory program in the 4th grade and never stopped! She plays the violin, viola, cello, and bass but is proficient on cello. Cheryl is a graduate of Interlochen Arts Academy and the University of Michigan (where she won principal cellist of the most advanced orchestra). She earned a master’s degree in Educational Leadership from Western Michigan University and a Juris Doctor from the University of Detroit School of Law. She has been a licensed attorney since 2009. Cheryl’s passions include international travel, spending time on the beach with her family, and enjoying the zest of life. She grew up in Kalamazoo, Michigan, has three children, and resides in Charlotte, N.C.

During this time, Kroger has also received numerous national and regional awards for energy efficiency and sustainability, including in 2015 the Energy Star “Partner of the Year” Award, in 2012 the Alliance to Save Energy’s top award, the “Galaxy” Star of Energy Efficiency, and an “Award of Excellence” from Platt’s Publications.  Mr. George has presented before numerous Commissions and Associations, including the Edison Electric Institute, Touchstone Energy Partnership, Green Retail Decisions, and the Critical Consumer Issues Forum.