Microsoft and the Art of the Possible, with Brian Janous 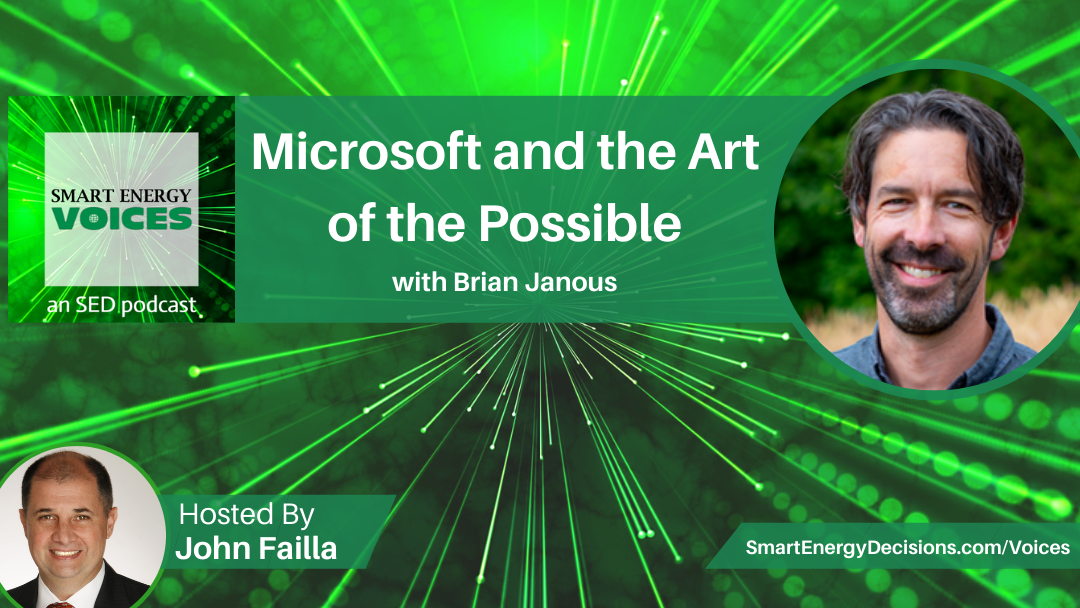 This episode of Smart Energy Voices presents the keynote speaker from the recent Renewable Energy Forum, Brian Janous - General Manager of Energy at Microsoft. As one of the world’s preeminent leaders in the energy transition, Microsoft is constantly innovating. Listen in as Brian provides a glimpse into the mindset and culture at Microsoft that has enabled its unique approach to innovation, including efforts to drive collaboration between peers, suppliers, and customers to enable broader adoption of renewable energy.

Microsoft has committed to be carbon negative by 2030 and to remove all of its historical emissions by 2050. The company is investing a billion dollars in climate technology to help accelerate those goals. While much progress has been made over the last ten years, more must still be done to achieve the deep decarbonization needed in the energy sector.

In 2012 Microsoft established its first commitment to be carbon neutral. At the time, the company was iterating on the concept of having all businesses pay into an internal carbon tax, then using that revenue to buy renewable energy credits and carbon offsets. The goal included Scope 1 and Scope 2 emissions and employee travel. Altogether about two million metric tons of emissions were associated with that commitment.

Microsoft’s first PPA began with a conversation with former CEO Steve Ballmer. Brian’s team pitched a small deal, about 75MW for seven years, as a way to start Microsoft’s renewables journey. While the project was presented to him, Steve realized it would be a hedge because Microsoft would have been assigning a fixed price. Steve interjected that Microsoft doesn’t hedge energy prices. The company can self-insure all the risks and isn’t worried about energy prices. Brian and his team regrouped and came back with something bigger.

The week before the team would present their new project idea, the CFO stepped down from the position, and Amy Hood stepped in. In her first week as the new CFO, Amy was brought a 20-year, 110MW proposal for purchasing wind energy in Texas. Brian was nervous going into the meeting, thinking that there was no chance she would agree to it. He was happily surprised when Amy decided that the plan was a great idea. It turned out that before joining Microsoft, Amy had traded energy at Goldman Sachs, so she quickly understood the details.

The future is in sharing

What the industry has done over the last ten years is impressive. Goals that would have been enormous lifts a few years ago are now becoming expected of organizations. Company after company is making serious commitments to the environment. As difficult as it was, all of the things done over the last ten years were crucial steps in this journey. Carbon offsets and RECs in the long-term weren’t that consequential, but they were essential to get the industry where it is today.

While some companies must be out in front, lead, and innovate, not all can do that. Most companies will be far behind the leaders. Their role will be to learn faster than those before them. Companies will have to share their knowledge so their experience can be studied. With that sharing, there will be a lot of positive peer pressure to change faster and do more to achieve climate goals. Sharing experience will accelerate the energy industry in the journey to a sustainable future.

Brian is responsible for leading the development and execution of Microsoft’s global data center energy strategy. These data centers provide the foundational cloud infrastructure for Microsoft’s online and cloud services for consumers and businesses worldwide. His responsibilities include oversight of energy policy, procurement, renewable energy, distributed generation, and overall environmental impact to ensure that Microsoft’s cloud infrastructure is reliable and sustainable. Microsoft plays a critical role in the energy industry, both as a large consumer and as a provider of foundational cloud services that support grid resilience and decarbonization.

Brian joined Microsoft in 2011 after 12 years in the energy industry, where he worked as a Sr. Consultant at Brubaker & Associates, assisting Fortune 500 companies with energy procurement, policy and sustainability matters. Brian holds an MBA from Webster University, a Bachelor of Science in Finance, and a Bachelor of Arts in Philosophy from the University of Missouri. Brian has also served on the board of the American Wind Energy Association (now the American Clean Power Association). He presently serves on the board of the Institute for Energy Studies at Western Washington University.