Profiles in Leadership: Dean Nelson and the iMasons Climate Accord 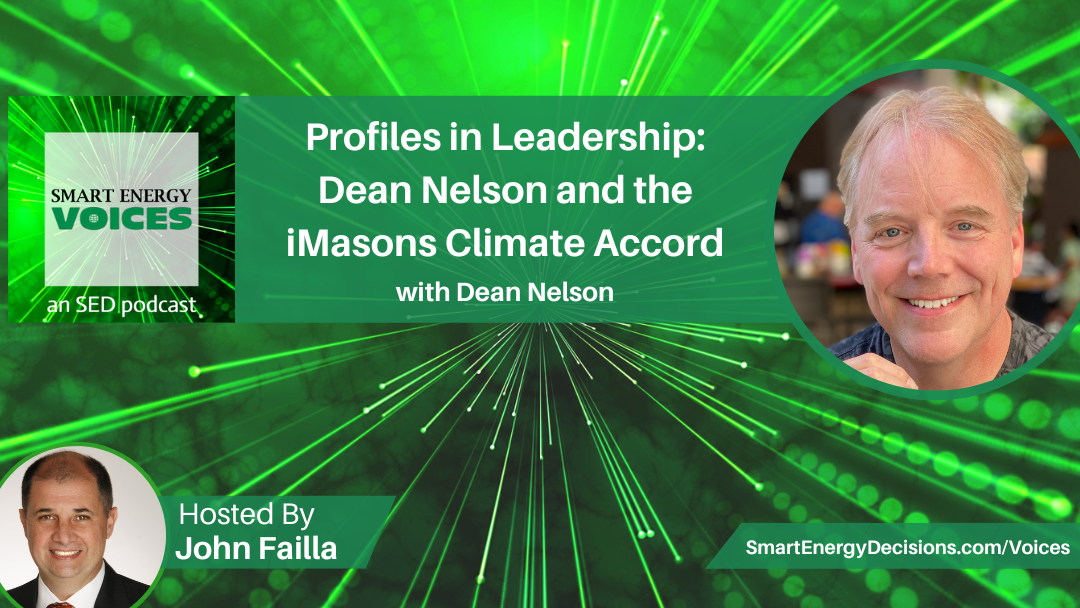 In this episode of Smart Energy Voices, host John Failla is joined by Dean Nelson, Founder and Chairman of Infrastructure Masons and CEO of Cato. They discuss the creation of the iMasons Climate Accord and the community efforts for diversity and inclusion, education, sustainability, and technology.

Dean started working in the digital infrastructure industry in 2008 when he was at Sun Microsystems. Sun had various communities, but Dean's industry didn't have representation. So he started a group called Data Center Pulse, which rapidly grew to around 7000 people across 66 countries. People all over the world united in their efforts on different projects.

When Dean joined eBay, the work was all-consuming and moving so quickly that he realized he was losing touch with his community. When he left eBay to take a sabbatical touring colleges with his daughter, he decided he wanted to bring his friends back together. Dean called nine people and asked for their thoughts, opinions, and ideas about how to make a community again but to do it a little differently. Now the iMasons community has 7,500 people participating in over 130 countries.

As a professional association run by members, iMasons’ key objectives are diversity inclusion, education, sustainability, and technology. At an event, company names are kept out of the equation. People sit together and have working sessions without knowing which company they’re helping or which is helping them. Instead, each table spends a set amount of time working on the same issue. This environment has become one of the best consulting groups because of so many perspectives coming together. Even competitors sit at the same table and work together.

The key is that iMasons aggregates and amplifies the incredible work from its members and their companies. That’s what allows it to succeed. The organization doesn’t drive and create a product. Instead, it enables the community to come together and compound its impact.

The motivation of the iMasons Climate Accord

With temperatures rising, global warming, and various other climate issues, the advisory council at iMasons recognized that progress wasn’t moving quickly enough. Dean called one of the board advisory members, Christian Belady, and they gathered together 40 people who have some of the largest portfolios in the world. They spent six hours at that event creating pages and pages of content. After summarizing all the ideas, they all agreed they were aligned on carbon reduction. The result was the creation of the iMasons Climate Accord on Earth Day 2020.

Carbon reduction is a great goal, but having a standard carbon accounting methodology would be necessary for people to align. Finding or creating that standard became iMasons’ goal. If there were a common methodology or marking on products, better purchase decisions could be made based on carbon history. Also, companies will know exactly where they stand from a carbon standpoint.