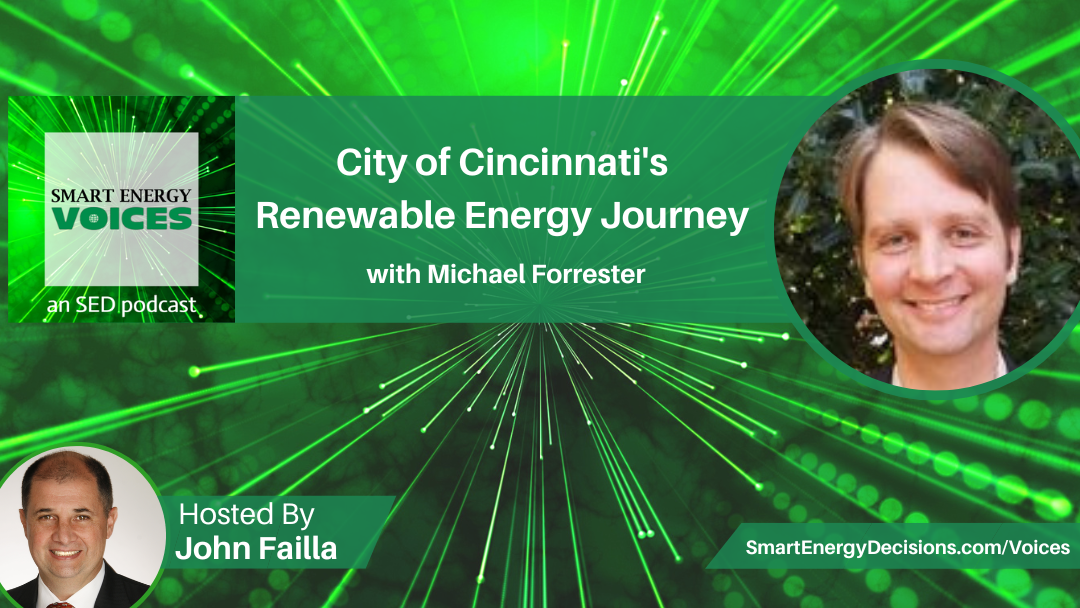 In this episode of Smart Energy Voices, host John Failla introduces Michael Forrester, former Director of Environment and Sustainability for the city of Cincinnati. At SED’s recent Renewable Energy Forum, Michael shared his insights on Cincinnati’s strategy of acting like a corporation that led to implementing its 100 MW PPA.

The city of Cincinnati has ambitious climate goals. Every five years, the city creates a climate action plan called the Green Cincinnati Plan. The most recent plan was completed in 2018 and laid out recommendations to reduce the city’s carbon by 80% by 2050. These goals were created by reaching out to the community and building a document reflecting what they wanted to see in a climate action plan.

The 2018 plan was created by convening over 30 public meetings and receiving over 1,400 public comments. The Green Cincinnati Plan is a plan of action that the city works hard to implement, and approximately 85% of the recommendations laid out in 2018 have been accomplished. The lack of action on the remainder is due to either state policy restrictions or technologies that aren’t yet ready, such as automated vehicles.

The summers in Cincinnati have already risen by two degrees and will rise another six or seven degrees by the end of the century. The environment that the city was initially built for is no more. Rainstorms are intensifying and contain 37% more water than previously. The city’s sewers weren’t designed to manage that much water, causing incidents such as the flooding of the Xavier University soccer field with 12 feet of water.

Cincinnati is a city of seven hills. Those hills are composed of clay soil with no bedrock, causing the soil to slump when it becomes supersaturated. The increase in rainwater is having a significant impact on Cincinnati’s budget. The main transportation artery in the city of Cincinnati, Columbia Parkway, required repair on one of the hills, so the funding for a new police station had to be used for hill repairs instead. The Metropolitan Sewer District of Greater Cincinnati has spent over $150 million cleaning up sewer backups in residential basements in the past ten years.

Because Ohio is a deregulated state, the city of Cincinnati can choose where to source its energy. Utilizing the existing budget, the city set out to reduce its carbon footprint through a 25-megawatt solar array for city operations. The city also wanted to create jobs by ensuring its residents could participate in the construction. Eventually, the project evolved into a 100-megawatt solar array so the city could achieve the cost-saving benefits of scale.

City operations alone weren’t enough, so the city had to figure out how to tap into its residential aggregation program and use that load of 83,000 residents to help achieve scale. The contract is divided into 35 megawatts for city operations and 65 megawatts for residential. The residential portion was all about partnership. The city went to the market and offered its residential accounts in exchange for a company signing a PPA on the city’s behalf. Through a series of contracts, the city of Cincinnati could maintain rights to the RECs and the capacity for the solar array. These efforts protect the city of Cincinnati while also saving it millions of dollars.

Please Note: since this episode was recorded, Michael Forrester has moved on from his position for the City of Cincinnati.


Michael Forrester is the former energy manager for Cincinnati. He is responsible for the purchase of gas and electricity for City government and its residents through the Cincinnati Aggregation Program. These programs purchase 100% green electricity for City facilities, and residents, and was the 1st aggregation program to offer renewable natural gas to residents. Michael oversees efficiency improvements at City facilities and is working to develop 25 megawatts of solar throughout Cincinnati. In addition, he manages the City’s residential energy programs which include the Get Efficient Program and the SolarizeCincy program. He is a graduate of both Miami University and Indiana University.