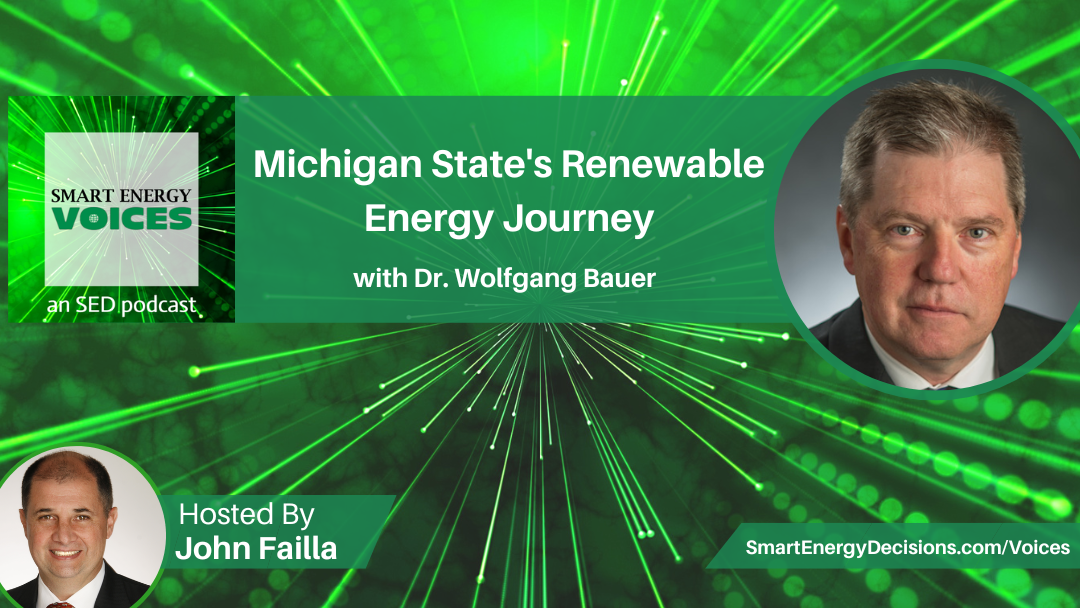 In this episode of Smart Energy Voices, host John Failla is joined by Dr. Wolfgang Bauer, Distinguished Professor at Michigan State University, to discuss the renewable journey he has led at the university. Wolfgang is also an active Smart Energy Decisions Advisory Board member.

Organizations don’t become greener by simply throwing money into more renewable power and saving emissions - they must ensure they’re saving energy at the same time. If an organization can make an energy transition that produces fewer emissions and saves money, then that’s a win-win situation. This balanced approach to the economic conversion to renewables is one of the reasons why Michigan State University has been successful.

When MSU was creating its Energy Transition Plan, Wolfgang was the Department of Physics and Astronomy Chairperson. He volunteered to be on the committee and became one of the lead authors of the Energy Transition Plan. For two years, the committee coordinated participation not only across Michigan State University but from the wider community. They conducted public forums, held writing campaigns, and tried to reflect as wide an array of opinions as possible with the idea that, eventually, MSU would transition to 100% renewable energy.

MSU has an “all of the above” approach for its energy transition. It has a recycling center and a surplus store. The university has recycling contracts to ensure that its waste stream is not just thrown out but rather converted into usable products. An organic waste composting facility uses the university’s lawn clippings and leaves. Research into geothermal arrays has been a dead-end thus far, but that is part of the nature of research.

MSU has an anaerobic digester to process food waste from the cafeteria system. It also uses cow manure from the College of Agriculture, reducing the need for artificial fertilizers on the fields, and it produces electricity and heat. The university also has demand reduction programs and invests up to $10 million annually in energy conservation measures.

Including the next generation

Allowing students to participate in the university’s energy transition process prepares them to take that knowledge and experience into future careers and situations. MSU leads by example, creating partnerships with other entities and becoming an educational leader in energy. The university’s Energy Transition Plan set specific goals with concrete steps over the years, closely increasing the campus’s renewable energy fraction and reducing greenhouse gas emissions in measurable steps. Achieving net zero in one step isn’t realistic. Working incrementally, saving money in its energy portfolio at each stage of adding more renewables is much more doable without harming the business case for the rest of the enterprise.

Dr. Wolfgang Bauer is a University Distinguished Professor at Michigan State University, where he has been on the faculty since 1988, holding a dual appointment at the National Superconducting Cyclotron Laboratory. He was chair of the Department of Physics and Astronomy from 2001 to 2013 and Founding Director of the Institute for Cyber-Enabled Research from 2009 to 2013. From 2013 to 2020 he served as Senior Consultant and Associate Vice President, driving the implementation of the Energy Transition Plan at Michigan State University. In 2019 he was also President of the MSU Foundation. He is co-owner of several businesses in the renewable energy sector and has consulted on renewable energy issues for the fossil fuel industry and hedge funds. He has published over 200 research articles, conference proceedings, and books, and has given over 400 invited presentations in 25 countries.
Connect With Smart Energy Decisions