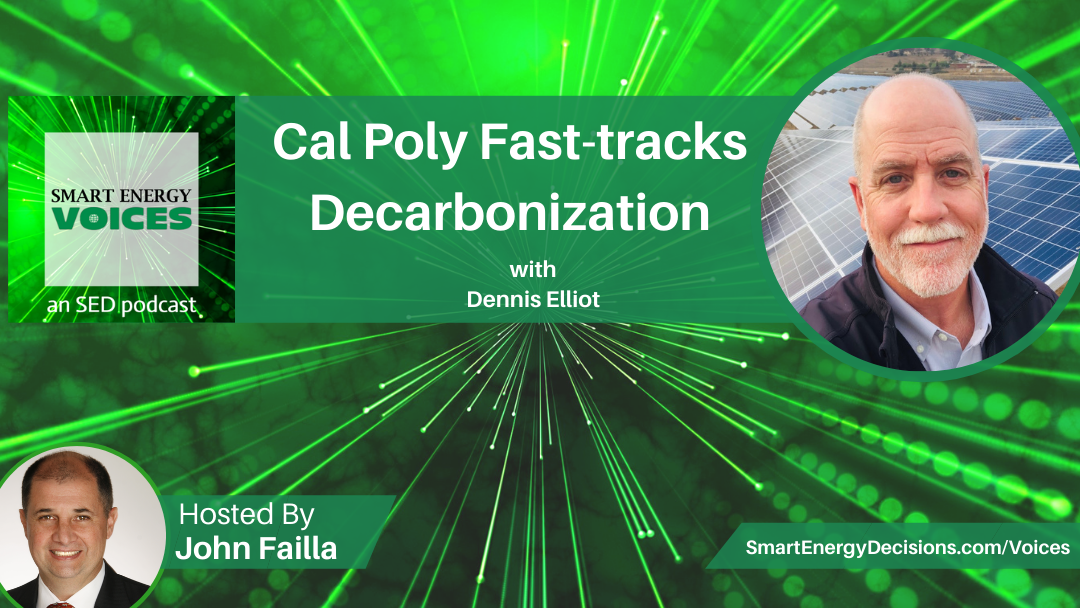 In this episode of Smart Energy Voices, host John Failla sits down with Dennis Elliot, Assistant Vice President for Facilities at California Polytechnic State University, to discuss Cal Poly’s climate action plan and decarbonization efforts. In a recent interview Dennis had with SEV’s sister podcast, Beyond the Meter, John learned about the great work Dennis and his team are doing at Cal Poly. Listen to this follow-up interview to learn more about Cal Poly’s work and how it is changing the way academia views its climate impact.

Until a few years ago, Cal Poly hadn’t made a comprehensive utilities plan. They had run feasibility studies to assess particular infrastructure needs, but they’d never taken a broader approach across all utility categories at a master planning level. As part of Cal Poly’s 2035 Master Plan development, they recognized the need for a more holistic approach.

To keep their model as accurate as possible, Cal Poly engaged its peers at the Chancellor’s office. By comparing their plans to the database of all the retrofits that have been done across the University of California system, Cal Poly was able to ensure accuracy for various types of construction. Cal Poly evaluated what the impact of maintenance trades staffing would be. Using APPA guidelines for staffing, they updated the model to be more tailored to the university.

Improvements rather than carbon offsets

When reductions are as low as they can get, carbon offsets can be considered. However, Cal Poly would prefer to first spend money on building and infrastructure improvements that have real reductions. Cal Poly has a unique position in that they're a large, land-holding institution. With around ten thousand acres of land, they currently have an operational dairy, feed mill, and several animal units. They use some of their compost for soil amendment. Science shows that if the soil's carbon level increases, the soil's ability to hold water is also increased. Treating the ground in this manner is one way Cal Poly is more effectively using its current resources than simply purchasing carbon offsets that could have less impact.

One of the primary strategies for net neutrality is electrification. California is planning on the electric grid being carbon neutral by 2045. If organizations can use electricity as their primary energy source, they should. As it stands, many university campuses have district energy plants with natural gas-fired boilers. The reality of combustion and natural gas is that they cannot exceed more than 100% efficiency. However, because of how the vapor compression refrigeration cycle works when used as either cooling or heating, this method is capable of being 300% efficient. Heat recovery chillers are designed to create a condenser water temperature that is higher than other chillers. Then that heated water is sent to a boiler plant as a supply of heating energy.

The entire UC system has committed to achieving carbon neutrality by the year 2025. Since UC can afford to do things that the state colleges can't, they share resources and ideas. For example, Cal Poly's colleagues at Santa Cruz worked with a consultant called EcoShift to identify four major variables. 1. How much should be invested in energy efficiency retrofits of existing buildings? 2. What is the performance standard that should be set for new constructions? 3. How much development of renewable onsite generation or contract renewables for procurement should there be? 4. What will they have to spend on carbon offsets?

Another issue Cal Poly must consider is the future cost of carbon. The cost of gas, water, sewer, and electricity are relatively stable, so projecting these costs are more simple than carbon. The price of carbon is volatile, and there's less data available. The tool EcoShift developed for Santa Cruz is open-sourced, so it's available to any institution that wants to use it. Cal Poly worked with EcoShift and then used that information to go beyond the variables mentioned. They considered both energy-retrofitted buildings and standards for new construction. By looking beyond the next few years, Cal Poly is working more quickly towards a sustainable future. Investment in energy efficiency, the elevation of building performance standards, and the adoption of more renewables all return a positive net present value.