Aside from the devastating impact of Hurricane Harvey, the storm has also had an impact on the energy market. This event provides a great example of why energy buyers should be thoughtful about their energy strategy and how to best protect their business from market volatility that's weather related.

Few states have as much direct impact on the energy sector as Texas. Despite all the disruptions and damage that Harvey caused, the energy sector has remained resilient overall. While many groups expect little impact to operations in the long run, Harvey has demonstrated that various energy sectors are subject to the impact of a storm. Production, traditional load demand and new LNG export facilities can all be affected by extreme weather conditions.

Let’s take a closer look at how the energy sector is responding in the aftermath of Hurricane Harvey:

The Gulf Coast is home to 40% of the refinery capacity in the U.S. According to WSJ & CNBC reports, Hurricane Harvey has disrupted between 20 and 25% of the entire nation’s refining capacity.

Texas refineries were still about 3 million barrels below their daily average early the week of Sept. 4. This is due to shut-in oil production in Texas and outages from flooding that have caused reduced operations.

According to the U.S. Department of Energy's Daily Events report (as of Sept. 18):

This disruption to refineries has had a major impact on U.S. gasoline prices. The biggest impact has been due to delivery disruptions. Deliveries from the Colonial pipeline, which carries gas from the Gulf Coast across the Southeast and up to the Northeast, was shut down for a period of time. It has since restarted operations. The Southeast will be impacted the most as the map below illustrates. The Northeast and South will also see great impacts from disrupted delivery. 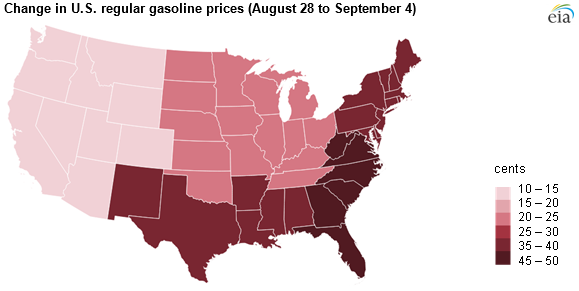 Both onshore and offshore natural gas production in Texas was impacted by Harvey. Production across the Lower 48 also declined from 73 Bcf/d to 71 Bcf/d as a result of the hurricane. Crews were able to return to platforms in the Gulf of Mexico this week while onshore producers reported that they expect little impact on their operations in the long run.

Notably, the nation’s only operating LNG export facility, Sabine Pass, which is located across from Port Arthur, TX, was not directly impacted by Harvey. Sabine Pass had to significantly reduce operations around Aug.  31 due to ships being restricted from entering the intercostal waterway due to "unprecedented currents on the Neches River" after Harvey. As a result, it was over two weeks since a ship had arrived at Sabine Pass. The first arrival in the aftermath of Harvey was on September 6th.  Storage tanks at Sabine Pass were so full that gas had to be turned away throughout the week.  With four of the current five approved LNG export facilities under construction located in the Gulf Coast, future storms could significantly impact export demand. Current demand at Sabine Pass was 2 Bcf/d but if total Gulf Coast demand is ~7-8 Bcf/d by 2019, future storms could have a greater impact.

The impacts on production as Sabine Pass can be seen in the tables below: 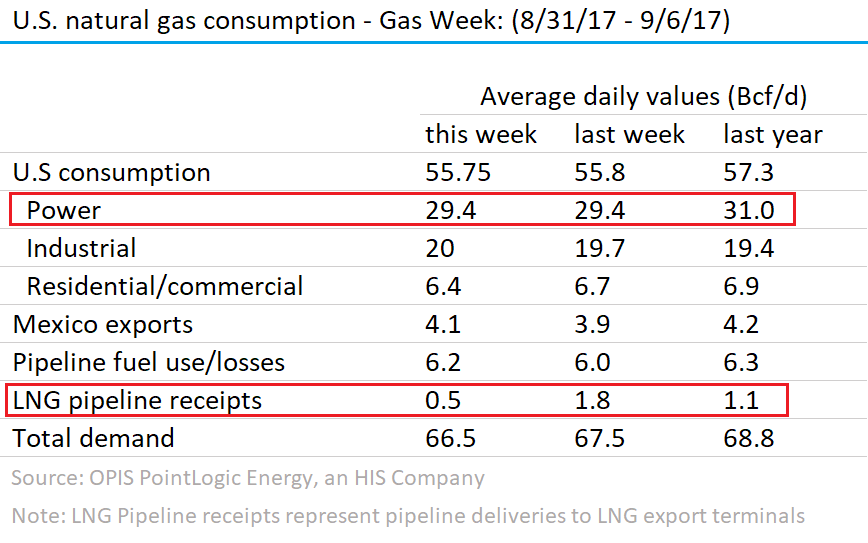 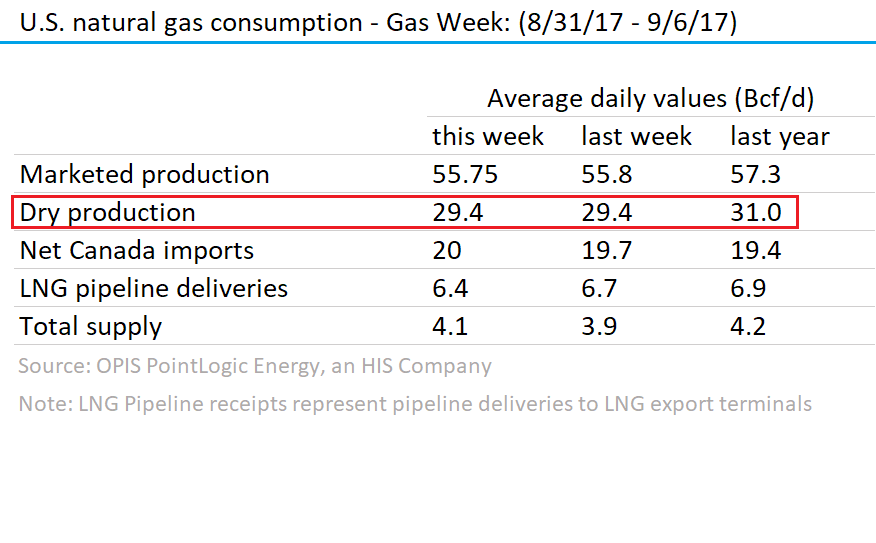 This is down from a seasonal normal of 65,000 to 43,000MW. This reduced gas-fired generation demand. Fortunately, infrastructure for local utilities was largely unharmed and energy providers responded quickly.

Texas is the greatest producer of wind energy in the country, but only 2,000 MW of capacity were located in coastal areas that were in the path of Hurricane Harvey. At the onset of the storm, wind facilities were running exceptionally well, hitting 95% capacity. However, once conditions worsened, farms were shut down as wind speeds exceeded safety limits.

Whether you're located in Texas or not, the impact of Hurricane Harvey is a reminder to us all of how interconnected our energy markets are. A diversified energy management strategy can help protect energy buyers from weather-related events. Both time diversification and cost allocation could help your business effectively manage their energy strategy in the face of market volatility. To learn more, click here.