Challenges of Energy Management for Healthcare 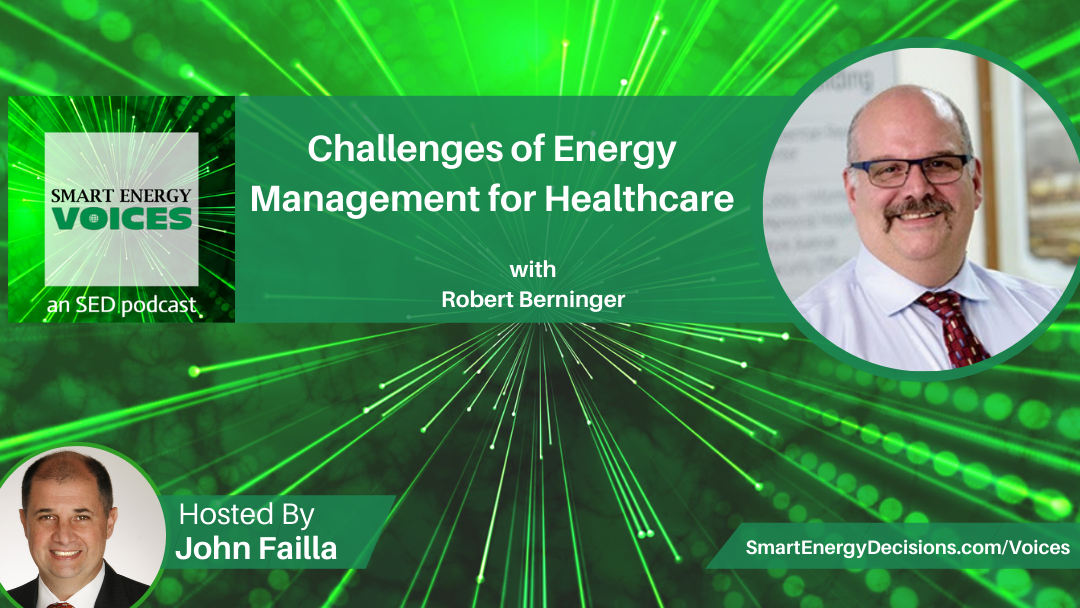 In this episode of Smart Energy Voices, host Debra Chanil discusses several innovative retro-commission projects with Robert Berninger, Director of Plant Operations, Energy and Engineering at Memorial Sloan Kettering Cancer Center (MSKCC). Bob oversees more than 4 million square feet of critical care facilities in the heart of New York City. Listen as he recounts his experience evaluating potential projects so you can benefit from the great insights Bob has to share.

Robert Berninger oversees approximately eleven buildings as well as the entire energy budget for the institution. Bob started at MSKCC as the Energy Manager and has worked with them for over fifteen years. In his time there, the institution has kept its energy footprint steady while also doubling in square footage. A significant factor in that achievement was Fault Detection & Diagnostics (FDD). Bob was initially leery of fault detection. He thought it would highlight issues in the building that they couldn’t correct due to other issues. They began with a systematic approach, starting with the chilled water plant, heating plant, and ended with the VAV box level. With FDD, MSKCC is alerted when an issue occurs rather than waiting for a problem to be reported. This reduction in time from issue to resolution has saved energy, time, and money.

In 2020, MSKCC won the Smart Energy Decisions Innovation Award for Healthcare Energy Data Management for Virtual Energy Monitoring and Fault Detection and Diagnostics. The project started as a response to New York City Local Law #87, which requires all buildings over 25,000 square feet to have an energy audit and retro-commissioning every ten years. In 2018, the Breast and Imaging Center at MSKCC was due for this audit, so they engaged a vendor to create a report. MSKCC used this report to come up with several capital ECMs (energy conservation measures) that had been highlighted. One of the projects was to install a virtual energy managing and fault diagnostic system. This addition was in response to the finding that any time a system was retro-commissioned, the energy usage would gradually increase and undo the initial benefits if the system wasn’t constantly monitored. With fault detection and diagnostics, MSKCC is able to find out immediately if something wasn’t working correctly. This warning allows them to address issues and maintain the benefits of the original adjustments.

The Positive Results of Retro-commissioning

The main campus of MSKCC is using steam to hot water conversion along with cogeneration. The three buildings in the project use Con Ed steam, which is a relatively wasteful system. MSKCC is working on converting 130 air handlers using steam preheats to hot water, changing out the coils, or re-using their chilled water coils for heating using low-temperature hot water. They’re also installing a total of 3.3 MW of cogeneration, which is matched to their base heating load so that there’s no waste of heat. Overall the project will save the institution about $8-10 million per year in energy costs. That’s an improvement anyone can support.

Robert (Bob) Berninger is the Director of Plant Operations, Energy and Engineering at Memorial Sloan Kettering Cancer Center (MSKCC). In his 15 years with MSKCC, Bob has held various positions, first as the Energy Manager, overseeing and implementing energy conservation projects, and then as Plant Operations Manager. Currently, he is a Director managing the day-to-day operations of the HVAC systems and staff, overseeing the energy management systems and energy budgets, exploring and implementing energy conservation measures. Prior to this position, Bob was the Assistant Manager of the Physical Plant at Columbia University. He holds a B.E. in Marine Engineering from SUNY Maritime College. Robert is a Certified Energy Manager (CEM), Certified Energy Auditor (CEA), and a Certified Sustainable Development Professional (CDSP). He also holds a United States Coast Guard Chief Engineer’s Steam and First Engineer Motor License. He is a member of the Association of Energy Engineers and is a past President of the New York City Chapter of AEE.  Bob was awarded the International Energy Manager of the Year in 2016 by the Association of Energy Engineers.