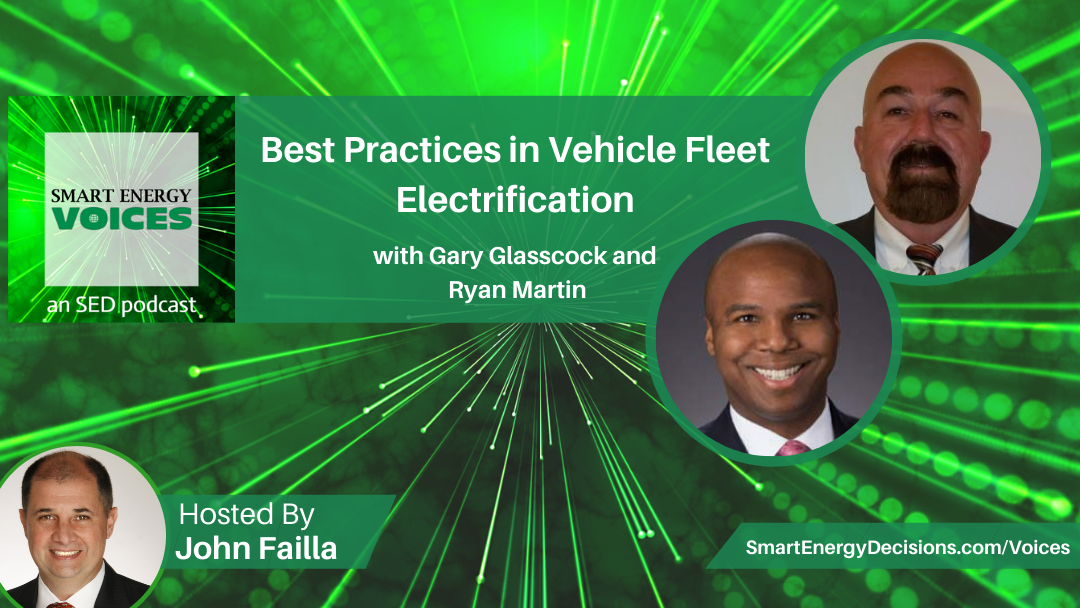 In this episode of Smart Energy Voices, host John Failla introduces Gary Glasscock and Ryan Martin from Smart Energy Decision’s recent Innovation Summit. Gary is the Director of Fleet Management for the City of Houston. Ryan is the Interim President and Managing Partner at EVolve Houston. This panel conversation, moderated by SED’s Director of Research and Content Debra Chanil, highlights the innovative public-private partnership between the City of Houston and EVolve Houston.

The City of Houston adopted its Climate Action Plan in 2020 as a strategy to reduce greenhouse emissions and achieve carbon neutrality by 2050. One aspect of that plan regards fleet management and converting all the city’s nonemergency, light-duty vehicles to EVs by 2030. In addition, the city is looking for any alternatives to implement that will reduce emissions for emergency and heavy-duty vehicles.

A typical obstacle with any change is bringing multiple departments together. Generally, city departments are focused on their particular function and are risk-averse concerning the equipment they need to function. Making a case for EVs isn’t always easy, especially with the associated cost premium compared to conventional vehicles. Recently, there was a recall of the EVs the City of Houston currently operates, which gave rise to some caution on the side of the departments.

EVolve and the City of Houston

The City of Houston determined that because EVs are so complex, a public-private partnership would benefit the region to support its environmental policy goal. A passionate team of people responded to take on that charge. The City of Houston was joined by academics from the University of Houston. Retail energy providers from NRG, Shell, and the transmission line utility for the region, Centerpoint, decided to take on this problem collectively. As a product of that collaboration, EVolve was created as a public-private partnership focused on advancing clean air and climate change initiatives through electrified transportation. The programs they created have led to collaborations with the city and the education of the consumer market.

EVolve Houston began a fleet study program under the premise that they could support the market and the Houston area, given the complexities and dynamic factors involving city or corporate departments’ fleets. As a baseline, the starting place would be to study the vehicles and make decisions based on that data. EVolve studied thousands of vehicles. This study also involved a three-year look forward on vehicles and internet-connected charging station infrastructure that will be available. This study concluded that about 25% of the City of Houston’s vehicles were available to be converted to EVs. These changes would result in about $6.9 million in pro forma economic savings and about 13,500 metric tons of CO2 emissions reduction.

Houston’s city council recently approved the purchase of 97 EVs to add to their existing 40. The city looks to establish pilot programs in its larger departments with these additional EVs. The data collected from the operation of these pilot vehicles will be used to make an efficient plan for a much broader scale EV program. These pilot programs will also go a long way to ease the fears within the departments. They’ll be able to see first-hand how these vehicles can be operated in their specific applications. That experience will help with motivation from within the departments.

For the last couple of years, EVolve Houston has been going to the Houston Auto Show, where it has been bringing electric vehicles. While EVs can be considered controversial in some ways, many people enjoy them. One of the best ways to make that point is to directly engage the public with the cars. In addition to the auto show, EVolve facilitates a ride-and-drive program, similar to a test drive.

EVolve also publishes academic studies, speaks on panels and webinars, and does a lot of academic work on the consumer side. In addition, the organization studies the region to determine the most viable path to curb some of the range anxiety that many people have. Recently EVolve published a regional infrastructure strategy for electrification. This study looked at all the publicly available charging in the Houston region juxtaposed against the growing current demand. The goal is to have half of new vehicle sales be electric by 2030. Keeping up with that growth and excitement will require production to pick up momentum.

Ryan is a member of the Board of Directors for Houston First Corporation, where he co-chairs the Procurement Committee and drives strategic board initiatives. Ryan is also a Board Member and Corporate Secretary of Legacy Community Health, and a Board Member of Houston Botanic Garden, Whitman Controls, and LDR Leadership.

Ryan is a graduate of Harvard Law School, Louisiana State University Honors College and the Beijing Language and Culture University. Ryan is fluent in Mandarin Chinese and a licensed attorney in the State of Texas. He is a member of the Houston Committee of Foreign Relations and an interviewer for Harvard University.

Ryan resides in Houston with his wife and daughter, Elizabeth and Sasha.